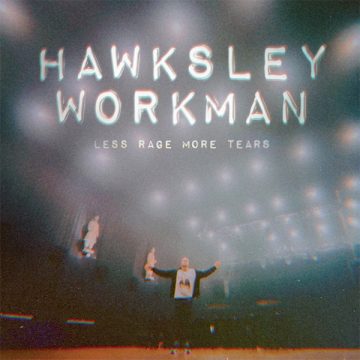 Hawksley Workman’s newest release, Less Rage More Tears is an absolute departure from 2019’s Median Age Wasteland. While the latter was more conventional guitar-based folk rock, Less Rage More Tears is somewhat reminiscent of 2010’s Milk and 2003’s Lover/Fighter, to a lesser extent, with Workman returning to his ultra-whimsical, inventive and multi-faceted, upbeat pop rock ways, but with even more detail and complexity.

Produced by Montreal’s Marcus Paquin (Arcade Fire, The National, Stars, Sarah Harmer), this full-fledged 100% CanCon album offers some softer moments while at other times goes full-throttle in the direction of danceable synth rock. Throughout Less Rage More Tears, Workman, the two-time Juno award-winning Canadian multi-instrumentalist singer-songwriter, often takes us on time journeys through his youth, with ‘80s pop culture Easter egg references and sounds. Indie rock, pop, techno, rock, and dance music all intermix to make Less Rage More Tears a treat, especially for those with a desire for variety.

Nine tracks round out the vinyl release of Less Rage More Tears, with the CD version delivering ten songs, which includes “Just A Dream (Joguco Remix)”.

Opening track, “Dwindling Beauty (Let’s Fake Our Deaths Together)”, although lyrically quite despondent, opens with Workman’s sweet slow melodic voice, moving succinctly into a catchy chorus, making this a nice introduction and brings us back to a Lover/Fighter vibe.

“Around Here” and “Just a Dream”, the first two singles, suitably released earlier in the summer where they received heavy radio play, both kick into high gear synth and drums in an ‘80s inspired spirit. In “Around Here”, feline-lover Workman howls with the stray cat analogy of belonging; “I know we just want to be rescued somedays, with the stolen eyes of love that we carefully hide away”.

“Tahiti Treat”, much like the children’s pop equivalent of wine in the ‘80s, is a behemoth track. Evocative of artists such as MGMT, Depeche Mode, John Carpenter and even S’express, “Tahiti Treat” delivers an abundance of adventurous sounds and an upstanding rhythmic beat in the form of a love song.

“Whatever happened to good old-fashioned acid rain?
I miss those simpler times?
I’d give anything to have them back again,
To those handmade years backed up by a laugh track”.

Hawksley Workman’s always impressive creativeness and vocal range continue to shine on through each subsequent album, including this soul-warming dynamic release. Less Rage More Tears is quite possibly Workman’s finest, right when we need it most.

John Graham is a Vancouver-area resident who typically spends most days admiring music of all genres. When not listening to music, John is usually at a live show, somewhere in the bowels of Vancouver.
RELATED ARTICLES
album reviewalbum reviewshawksley workman
7.0