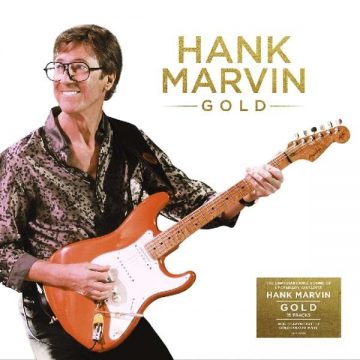 Hank Marvin is a living legend. There is no question or debate to this statement. He is held in high regard by Mark Knopfler, Eric Clapton, Paul McCartney, Brian May and so many more. McCartney even parodied him in the “Coming Up” video. Neil Young wrote a song about his influence on his (Young’s) music. The man’s guitar playing, style, phrasing and interpretations of classic songs has often been duplicated but no one comes close to his style. This three CD set goes a long way in exploring Marvin, and by focusing on his solo career, one gets music not often played on the radio or heard, especially in North America.

But these tracks should be played and celebrated. Gold is a collection of instrumental rock music that not only keeps you entertained for three CDs but will also have you digging up the original albums from which the songs came.

Gold opens with Marvin’s take on “The Good, The Bad and The Ugle” (from his 2000 set, Marvin At The Movies). It sets the standard and pace for what is to come. He covers some of the most iconic songs from the past 50 years and does them so well that he makes them his own. Listen to his version of “Hotel California” (from 2002’s Guitar Player), where he brings in Latin flavour. It works so well. This is just one example where Marvin is confident enough to stray from the more traditional or expected arrangements.

His admirers get to exchange guitar licks with him too. And again, the arrangements are very unique. Brian May teams up with Marvin on “We Are The Champions” (from 1992’s Into The Light), and the result is a pretty trippy version. Mark Knopfler on a couple of beautiful instrumentals and even old friend Cliff Richard makes an appearance on a couple of tracks.

This triple CD highlights Marvin’s solo career. Yes his work with The Shadows is brilliant, but that is available elsewhere. Here we are able to focus on an anthology of a brilliant guitarist and arranger. Marvin has a knack for taking a song into different directions without losing the beauty of the song. This is a rare talent. At no time did I find myself wishing for or ever comparing a song to the original. This is a quite a feat, especially when he covers songs like “While My Guitar Gently Weeps”(2007’s Guitar Man).

This three CD set is just the tip of the iceberg of the genius of Hank Marvin. You don’t need Brian May’s or Eric Clapton’s word for it, you simply have to listen to this compilation. It is all the explanation you need. Marvin is one of the pioneering rock guitarists, and although Gold is a fine example of his work, do yourself a favour and use Gold as a starting off point. Explore the world of Marvin.

Born and raised in Whitby, Aaron discovered music through his love of The Beatles. This led to a career in radio, writing for various publications, and ultimately a radio show about The Beatles (Beatles Universe), which ran for over four years. When not immersed in music, Aaron enjoys spending time with the loves of his life -- his wife Andrea, and daughters Emily and Linda (all of whom have an intense love of music too).
RELATED ARTICLES
album reviewalbum reviewsgold
9.0