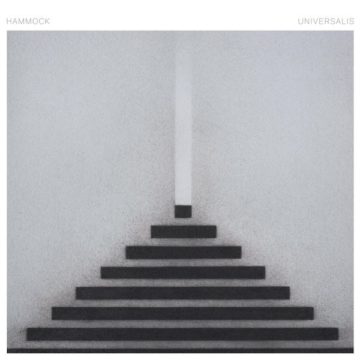 Hammock, Mark Byrd and Andrew Thompson’s ambient project, has released its eleventh studio album, Universalis, channelling an atmospheric post-rock style similar to artists like Robert Fripp and Brian Eno. Described by the band as a “vertical, upward movement back into the light”, Universalis is full of lightness and beauty, albeit with a hint of longing and grasping beneath the light. As ambient musicians, Hammock tend to move between spacey neo-classical and slowed-down post-rock; Universalis displays both sides of their musical repertoire, often moving from a track centered on strings to a guitar-based jam.

The album’s best tracks tend toward post-rock. Guitar-based songs such as “Cliffside” feature beautiful ambient melodies while still moving in a direction, evolving and changing as you listen. “Thirst” plays like a slow, mellowed-out track by Explosions in the Sky, as ambient music with a strong rhythmic and melodic core. On the other hand, the album’s weaker points come with songs centered on strings or synthesizers, such as “Universalis” or “Always Before”, which are a little too spaced out and lose the layered melody beneath the breathiness.

Overall, Universalis is an exquisite ambient album that simultaneously relaxes and draws the attention of the listener. Hammock continues to cement their place among the great ambient musicians.

Kieran Davey is a freelance writer and music enthusiast from Vancouver, Canada. He particularly enjoys alternative rock, groovy hip-hop, and basically any music from the 60's. Aside from reviewing music, he also loves playing guitar and spending time in nature.
RELATED ARTICLES
album reviewalbum reviews
9.0