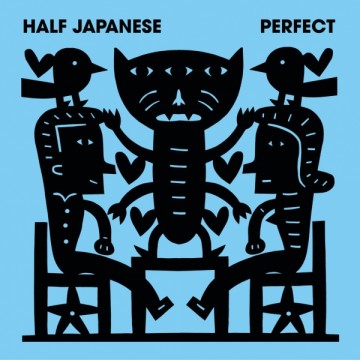 Beneath moments of mathy chaos are 13 songs that progress rather superficially. There is a profound lack of lyrical oversight on Perfect and the result is something akin to Deerhoof with brain damage.

Helium-infused electronics on opener “That Is That” decorate what is the most rudimentary song on the album. Then, on track two, Thurston Moore-imitation vocals wander around pale synths and a sinister descending chord progression. Next, on track three –“You and I” – one lovey-dovey lyric ends with “ever, ever, ever, ever part” in what is either the worst song writing I’ve ever, ever, ever, ever encountered, or a sign of improvised lyricism. I have reason to believe, given the history of Half Japanese, that both are true. And sadly, the language only gets worse from there.

Titular track “Perfect” has a promising beginning with its floating flute and exotic drums, but is, in a somewhat processional manner, dragged through the mud by annoying and meaningless vocals. I’d rather hear non-sequitur mumblings or angry glossolalia than empty, perfunctory ejaculations.

On tracks like “Hold On” the accompaniment really impresses with a dextrous, melding sound, providing a brief glimpse of what the whole album coulda-shoulda sounded like. Sure enough, even on this track, it’s only a matter of minutes before “Hold on to your seat and never ever ever ever ever accept defeat, no way” barges its way in. This is preschool poetry.

Tracks like “Man Without A Shadow,” “Here We Are,” and “Listen To Your Heart” hug the clichés even harder, and it’s a damn shame then that the backing instruments sound so fantastic.
Some interesting moments include the track “We’ll Go Far,” which sounds like if Danish punk band Iceage made deranged and unhealthy children’s music; and the Flaming Lips-esque ballad “That’s Called Love,” which is drenched in doe-eyed drool.

The terse “In Your Spell” and “A New Beginning” at least have the decency to spew their spiel and leave on the door’s backswing. The proselytization on “That’s Right” is suffocating and subscribes to the misguided belief that yelling “BE HAPPY!” is a cure for depression. Lyrics like “double rainbow, knock on wood” and “live your life to its fullest” aren’t inspiring; they’re idiotic, and there is no pretext of irony to fall back on.

Where is the Dadaist insanity from Half Japanese’s 50-track album 1/2 Gentlemen/Not Beasts? Where is the electricity that made Kurt Cobain die in their t-shirt? Maybe we can pin this on El Niño. Grumbling Ty Segall-esque guitars, winding synths and high-hat-heavy drums are all good ingredients, but Perfect makes one question the need for lyrics at all when the vacuous front-and-centre vocals are so detrimental to the overall sound, and that’s no good. It drove me half mad.