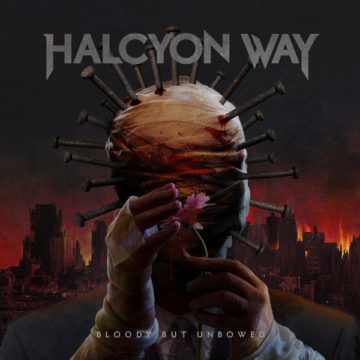 Atlanta natives Halcyon Way are back with their latest release, Bloody But Unbowed, delivering their unique blend of progressive and thrash metal. With driving and relentless guitars, demonic vocals, a solid bass line, powerful vocals and infectious rhythms that take center stage right from their title track, this album shows off Halcyon Way at their best.

This is an album that grows on me the more I listen to it. Admittedly, there didn’t appear to be any stand out tracks when I first listened to it, but after a few more goes at it, they appeared. “Slaves to Silicon” is one I took notice of for the lyrics that stay stuck in the brain, as is “The Church of Me” and “Cast Another Stone” (that also features a killer guitar solo by Jon Bodan). The choruses in these stand out and are instantly memorable.

“Superpredator” and “Crowned in Violence” both have this great dark and demonic introduction that leads to some strong and heavy guitar work that run throughout both songs making them definite stand outs on the album.

Vocalist Steve Braun has a voice that seems made for metal. His classical training is evident in the range and harmonies he is able to deliver on this album. His vocal ability shines throughout this album particularly on “Then Thousand Ways” and “Crowned in Violence”. Drummer Ernie Topran is in top form on “Burning the Summit”, the drum work on this track is incredibly dynamic and intense and makes for a killer track.

Bloody But Unbowed, though it needed to grow on me, it definitely did. It’s a solid piece of work from Halcyon Way that features decent and solidly good metal that will appease any metal or hard rock fan.

Samantha is both a writer and a fan of the arts and has been able to find numerous ways to pair the two. Eager to dive head first into writing for Spill, Samantha is an avid partaker and reviewer of live art in Toronto serving as an editor at Mooney on Theatre exploring live local theatre, she's a photojournalist for Been Here Done That, a travel, dining and tourism blog that focuses on Toronto and abroad and previously for Lithium Magazine. She's passionate about music, theatre, photography, writing -- not necessarily in that order. She drinks tea more than coffee, prefer ciders over beers, and sings karaoke way too loudly. You can follow her on various social media including Facebook, Twitter, and Instagram.
RELATED ARTICLES
album reviewalbum reviews
8.0