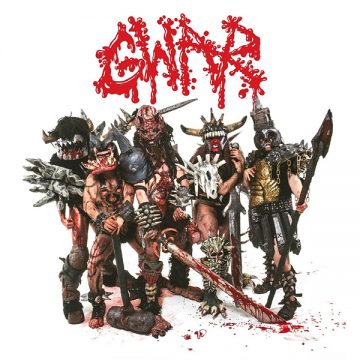 On the 30th anniversary of Scumdogs of the Universe, GWAR is rereleasing the album but this time it is remixed and remastered. Unless you have been under an interplanetary rock for the last 30 years GWAR is the band that started as an art project and became one of the most fun punk/metal acts Richmond, Virginia has ever produced. Their legendary live shows include satire, beheading, blood, and scatological humor mixed with an intelligent worldview. After coming back from a GWAR show, if you were uninjured and only had fake blood on you, it was a good night. Scumdogs of the Universe was remastered by Ronan Chris Murphy who has worked with the band on previous releases. He has done a masterful job taking everyone’s favorite cassette and live show memories and made them even better. Some examples would be on the opening track “The Salamanizer”; the bass parts are up front now. There is even an added bass part on the breakdown. It makes the song instantly groovier and brutal at the same time. On the track “King Queen”, everything is tuned a step down making it yet another GWAR song where it’s time to get in the pit. Overall, Dave Brockie’s vocals are so much crisper, specifically on vocal heavy anthem “The Years Without Light”. Drums rise on “Horror Of Yig”. One can actually enjoy the 1-minute drum solo in the beginning, and when the song hits the double bass it’s not lost. Even the game show-sounding “Slaughterama” has all of the sound effects turned up, making it have the live tour vibe. Overall, possibly one of the best releases of the year, and as always, the best GWAR release to date, made even better.

Ex-pat living in Geneva, Switzerland from the hard streets of Baltimore, Maryland. Ex-radio-monkey and avid listener of all things that are supposed to be cool.
RELATED ARTICLES
album reviewalbum reviewsgwar
7.0

by Ljubinko Zivkovic on November 20, 2020
JORDAN REYES SAND LIKE STARDUST American Dreams Records Ambient country might be a relatively new category for some, and it seems to be developing in popularity. After listening to [...]
8.0

by Nathan Pike on November 20, 2020
Dan Mangan Thief Arts & Crafts “I get sick of the same taste in my mouth and sometimes I need to sing someone else’s song to cleanse my palate.” A good cover song ought to sound as if the [...]
7.0