SPILL ALBUM REVIEW: GUERILLA TOSS – WHAT WOULD THE ODD DO? 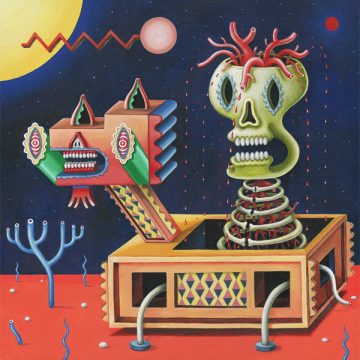 Guerilla Toss
What Would The Odd Do?
NNA Tapes

Guerilla Toss’ latest album not only holds onto the power of their underground sound, managing to combine a strong disco drive edged with a tinge of raw punk, but improves on their sound as well. There is no denying it’s groove, butWhat Would the Odd Do?makes you do more than just dance. It also makes you think.

Much of the inspiration of the album came from bandleader Kassie Carlson’s near-death experience following an opiate addiction, and it can be felt throughout the album. From the beginning of the album the title track creates a bright universe behind your eyes and in your head, rising higher and higher. As the album progresses, you see stars and planets pass, imagined by Carlson’s introspective and personal lyrics. To take you back to earth “Land Where Money’s Nightmare Lives” gently sets you back down on solid ground.

But it’s “Moth Like Me”, with its airy soundscape smashing into an intense drumbeat, that catches the essence of this album. The hazy sound accompanying Carlson’s lyrical barrage can feel a bit like a wave crashing over you, but listening carefully, you can hear a personal story that also feels universal with lyrics like like “Straightahead and in the night / Nothing matters but the light.”

While potentially overwhelming at times, What Would The Odd Do? is an interstellar journey that will take you in and out of your own mind. It’s a trip worth taking.

SPILL ALBUM REVIEW: GUERILLA TOSS – WHAT WOULD THE ODD DO?

The Spill Magazine is a Toronto-based online publication dedicated to covering the independent music scene with a strong focus on our thriving hometown talent. Our writers bring you up-to-date news, in-depth features on musicians and reviews for the latest CD releases. We also travel to the front lines for all local festivals including Canadian Music Week and North by Northeast.
RELATED ARTICLES
album reviewalbum reviews
7.0