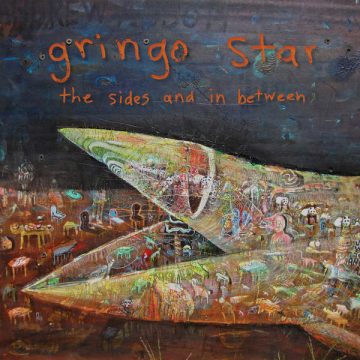 Gringo Star
The Sides And In Between
Nevado Music

Listening to Gringo Star’s The Sides and in Between is like being transported to the summer of the ’50s or ’60s. From the moment the first few chords in “Rotten” kick off, the indie band is able to recreate that funky Hard-Rock sound that isn’t as common in the music industry these days. By recreating and not just imitating, it gives more of an authentic and enjoyable sound as well.

Reading into the band’s history, it’s evident where their inspiration comes from.

Brothers Nick and Peter Furgiuele have an appreciation for older music. Their grandfather worked within the radio industry during the 1940s and ’50s, promoting Rhythm and Blues and putting on a lot of shows. Many were Gospel-based, but some featured the likes of Stevie Wonder, James Brown, and Sam Cooke. They would also go through their parents’ collection of records and developed an interest in artists like Buddy Holly and The Kinks.

While the songs all carry the Classic Rock sound, they aren’t all restricted by it. Some have a more bouncy and fun Pop-Rock tone, while others are Bluesy and darker. The combining of different genres also keeps the album interesting, rather than completely repetitive. What’s also nice is that while taking on that old-timey vibe, Gringo Star doesn’t limit itself to physical instruments like some other bands do. For example, there’s the computerized chime in “Magic,” the seagull calls in “Going Home,” and a laugh track in “Heading South.”

What should also be noted is that while The Sides and in Between is a great revival album, Gringo Star isn’t pretentious or stuck-up about it in their sound. It’s clear to hear they enjoy what they do and put effort into making their music.

The Sides and in Between is definitely an album that possesses lyrics and riffs that will get stuck in anyone’s head. It’s a fun, catchy, and overall good experience for fans of Indie or Classic Rock looking for something new to enjoy during any summer activity.

Music and writing have always been a big part of Sabrina's life. She would "borrow" her dad's rock and metal CDs from his collection and listen to them while going through the art books. Although she doesn't write angsty poetry anymore, she does have a Bachelor's Degree in Journalism which she uses to pursue a creative career path. When she's not writing, Sabrina can be found juggling a coffee cup and DSLR or Instagramming her food.
RELATED ARTICLES
gringo starnevado music