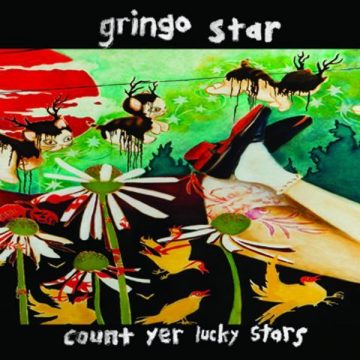 The oddly-named Gringo Star have returned with their second album, Count Yer Lucky Stars, a distinctive and fun Rock ‘n’ Roll album. It is comprised of a blend of Classic Rock, 1950-60’s Pop and Garage influenced Punk. All of the group members rotate playing instruments, which brings more diversity to their collective sound. At times, tracks are reminiscent of the Pixies, with songs like “Shadow” with its unexpected yelps and cries, and “You Want It” featuring cool guitar melodies and the unique vocals of Nick Furgiuele. You will find the ‘50s and ‘60s Pop influences in tracks like “Got It” and “Jessica” with their catchy and harmonious choruses. “Count Yer Lucky Stars” is one of the best tracks on the album with its upbeat drums, handclapping and rockin’ guitar riffs.

The band consists of four “Gringos”: founding brothers Nick and Pete Furgiuele, Pete DeLorenzo and Christopher Kaufman; and they all contribute to the songwriting in addition to playing all the instruments. Produced by Ben Allen (Animal Collective, Gnarls Barkley, and Deerhunter), this album is brimming with explosive talent, it’s sure to rock “yer” socks off.

Raquel likes music a lot, especially indie music. This sometimes results in her writing about it. When she's not doing that, she is working at a tech startup in Vancouver. And when she's not doing that she's in school, learning about human resources. And in her spare time she sips wine while watching the west coast sunset.
RELATED ARTICLES
album reviewsgringo star
8.0