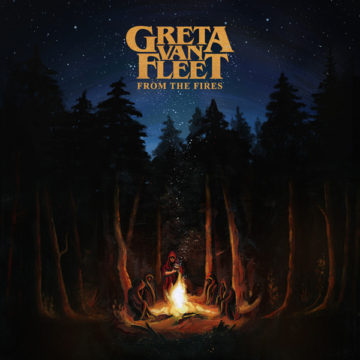 Having released their first studio EP, Black Smoke Rising, in April of this year, Greta Van Fleet are very well on their way to becoming one of North America’s biggest up-and-coming rock bands. The Michigan-based quartet has since been selling out every show on their current tour as a result their success. The band- consisting of vocalist Josh Kiszka, guitarist Jake Kiszka, bassist and keyboardist Sam Kiszka, and drummer Danny Wagner- have released their second record, From The Fires, a full length album, or rather a double EP, that consists of the four tracks from Black Smoke Rising, along with four brand new songs.

Rather than place the two EP’s n their respective order, From The Fires blends the eight songs together, making for a more comprehensive and cohesive flow, as if the album was written to be in this order. The songs from Black Smoke Rising highlight just why Greta Van Fleet’s debut EP caused quite a stir among fans and critics alike.  Their lead single, “Highway Tune” opens with a crunching blues rock riff and howling vocals and builds nicely with a steady groove and two more solid guitar riffs. The comparison to Led Zeppelin is completely unshakeable. From the rhythm section of Sam Kiszka and Wagner, the overdriven blues guitar of Jake Kiszka, or the vocal range and tonality, as well as lyrical structure and flow of Josh Kiszka, Greta Van Fleet sounds like Led Zeppelin brought into 2017. Across the four tracks from their first EP, the group covers hard hitting rockers- “Highway Tune” and the original title track, “Black Smoke Rising”- as well as an acoustic and slightly folky ballad with a swaying swagger, “Flower Power”, making for a highly dynamic debut.

After hearing the four songs from Black Smoke Rising, it becomes quite clear as to why Greta Van Fleet are being celebrated for their music, and the hopefully greater effect it will have on returning classic rock inspired music to the limelight.  With the additional four tracks that From The Fires offers, this is only heightened. Most notable, and perhaps surprisingly, is the band’s emotional and timely cover of Sam Cooke’s 1964 hit, “A Change Is Gonna Come”. The soul track originally became something of an anthem during the Civil Rights movement of the 1960’s and sadly, its lyrics feel just as appropriate for today.  Greta Van Fleet’s performance of the iconic track, however, is anything but unfortunate as the band channel a strong gospel inspiration to deliver one of the strongest ballads I have heard from an up– and coming- rock band.  Furthermore, the additional four tracks boast an impressively intricate groove on “Meet On The Ledge” and a fiery and crunching number on “Talk On The Street”.

For those who have yet to listen to Black Smoke Rising, From The Fires serves as an excellent entry point for new fans as the double EPs length is that of an album, making for a more engaging listening experience.  Furthermore, the additional four songs only build on the greatness and excitement that was found on Black Smoke Rising, making it one of the most exciting releases this year from a new rock band.  Upon listening to the classic and vintage vibes and soundscapes that in which Greta Van Fleet effortlessly channel, the hype surrounding them is more than validated and will leave listeners excited to see what the band does in the coming future.

A passion for music has always been a part of Gerrod’s life. As a young boy, he was raised on a steady diet of the music from The Chili Peppers, Aerosmith, The Stones, Prince, and others from his mum. Raised in the GTA, Gerrod continued to foster his love for music by attending a wide range of concerts and learning the drums. His unapologetic passion for music has no bounds and has spread to a wide variety of styles, whether it be the 90’s rock that sound tracked his teenage years, the jazz he studied in university, or his newfound love for hip-hop. He recently received his bachelors in music and education from York University and is passionate about writing and reviewing good (and less than good) music. Gerrod is also the drummer and songwriter for a Toronto based rock & roll band, One In The Chamber.
RELATED ARTICLES
album reviewsfrom the firesgreta van fleet
8.0