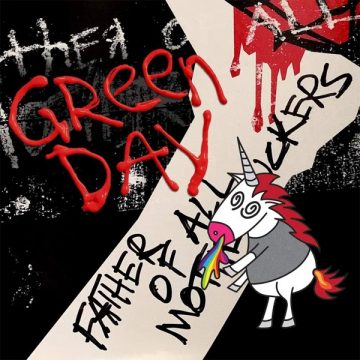 If records were rated on titles alone, then Green Day would win album of the century with Father Of All Motherfuckers. Unfortunately for us and the veteran punk band, that simply is not the case as their latest album, and first collection of new material in four years, branches out in an attempt to break the mould, and while delivering in the experimental department, fails to land nearly as strongly as the band would have hoped.

Father Of All Motherfuckers opens with the title track, “Father Of All…”. The song is among the most experimental on the album and I applaud Green Day for continuing to take risks in their songwriting and performance. It is after all what has kept them sounding fresh and dangerous throughout their thirty-year career. However the song feels like Green Day is chasing trends. Leaning on modern pop sensibilities, the track feels like Portugal. The Man, and while it has its own cool moments, it is not Green Day, a fact proven by how uncomfortable frontman Billie Joe Armstrong’s voice sounds singing it live. Similarly, “Fire, Ready, Aim” and “Oh Yeah!” fall into the same category, with the latter sampling Joan Jett’s “Do You Wanna Touch Me” rather than actually featuring her as a guest artist.

For all that it is not, Green Day is at its strongest on Father Of All Motherfuckers when it simply sounds like Green Day. Tracks like “Stab You In The Heart”, “Sugar Youth”, “Junkies On A High”, and “Take The Money And Crawl” are both nostalgic and very exciting. Should Father Of All Motherfuckers have been cut down to an EP of these hard-hitting, bare-boned tracks, or rather should some of the poppy, modern tracks have been given a hint of grit, then I am convinced that it would have been a truly incredible record.

A passion for music has always been a part of Gerrod’s life. As a young boy, he was raised on a steady diet of the music from The Chili Peppers, Aerosmith, The Stones, Prince, and others from his mum. Raised in the GTA, Gerrod continued to foster his love for music by attending a wide range of concerts and learning the drums. His unapologetic passion for music has no bounds and has spread to a wide variety of styles, whether it be the 90’s rock that sound tracked his teenage years, the jazz he studied in university, or his newfound love for hip-hop. He recently received his bachelors in music and education from York University and is passionate about writing and reviewing good (and less than good) music. Gerrod is also the drummer and songwriter for a Toronto based rock & roll band, One In The Chamber.
RELATED ARTICLES
album reviewalbum reviewsgreen day
7.0