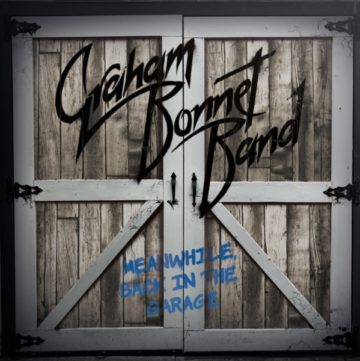 Graham Bonnet Band
Meanwhile, Back In The Garage
Frontiers Music

This is the second studio album from Graham Bonnet Band. Their first, The Book, was released in 2016 and was well received both critically and sales wise. They have issued a couple of live releases but Meanwhile, Back In The Garage is their second kick at the can in the studio and they rise to the occasion. The band consists of Graham Bonnet (vocals); Joey Tafolla (guitars); Beth-Ami Heavenstone (bass); Jimmy Waldo (keyboards) and Mark Benquechea (drums). The band’s official guitarist, Kurt James, makes one appearance on the album (“Livin’ In Suspicion”). Bonnet writes or co-writes the entire album, with the exception of the cover of “We Don’t Need Another Hero”.

Bonnet has been around since the mid 1960s, and has sung with some very big bands (Rainbow, Alcatrazz, Michael Schenker Group) and he has released numerous solo albums. However listening to this album, one gets the distinct impression that Bonnet loves what he is doing and he gives 110% throughout. It is worth pointing out that the man is 70 years old and can still hit those power rock notes. He really does have a remarkably strong voice. He is backed by very powerful instrumentation, and the unit is quite cohesive and tight.

Keyboardist, Waldo co-produced the album with Giles Lavery and they have a good ear for this music. They know how to arrange and produce the music. There is a great amount of energy and the music literally comes at the listener with full force, much like Bonnet’s voice.

Lyrically, the album is all over the place, but that is ok. It is a hard rock album. But that does not mean Bonnet is afraid to tackle important issues. He deals with cults (“Incest Outcest USA”), racism (“Long Island Tea”), mortality (“Past Lives”) and gun control (“America…Where Have You Gone”). Not the usual fair for a metal album, but again, Bonnet has the talent to make it all fall into place. The guitar solos are still there, the heavy bass, and some thought provoking lyrics.

Meanwhile Back In The Garage also comes with a live DVD filmed at Daryl Hall’s house (a live track appears on the album as well). This is a nice bonus for fans and something that they will enjoy. It adds to the overall packaging. As usual, Bonnet gives value for the money. Fans of metal music will love this album. Bonnet has a strong voice and even stronger presence. He has surrounded himself with talented musicians and he is ready to rock. What more do you need?

Born and raised in Whitby, Aaron discovered music through his love of The Beatles. This led to a career in radio, writing for various publications, and ultimately a radio show about The Beatles (Beatles Universe), which ran for over four years. When not immersed in music, Aaron enjoys spending time with the loves of his life -- his wife Andrea, and daughters Emily and Linda (all of whom have an intense love of music too).
RELATED ARTICLES
album reviewalbum reviewsfrontiers music
7.0