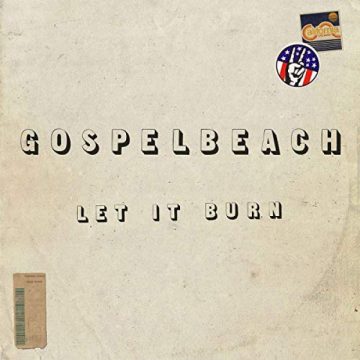 Let It Burn, GospelbeacH’s highly-anticipated third album, marks the return of original member Neal Casal. Tragically, on August 26, 2019, Casal tragically left us. Besides the world losing a remarkably talented artist, such a huge loss casts a giant shadow on the music. One cannot listen to John Lennon’s Double Fantasy without thinking of December 8, 1980, and this may also happen for Let It Burn.

The truth is, Let It Burn is a great album, the one GospelbeacH has been promising since their debut. It is so close to perfection. The songs flow one to the other and by the end of the record you are left with the overwhelming desire to listen to it again.

GospelbeacH tune into their inner most influences and out comes their own distinct sound. If Tom Petty led the Byrds as a Beatles tribute band, it might come close to the band on this album. They do not copy but rather tap into the same spirit and vibe.

Lyrically, Let It Burn surpasses almost every other album released this year. “I keep my ideas in my telephone, should have kept them in my head” from “Dark Angel”, is just one small example of the clever use of words and imagery. The album is full of such lyrics, in fact, I would say every song has something very quotable, but then I would be ruining the sheer pleasure in discovering such treasures. I will say that at times the album can be unbearably heartbreaking, but listening is the reward. The song “Fighter” comes to mind. This album is really about the human condition.

The playing is top notch. GospelbeacH is a tight unit that trades off and plays off one another. All the while they give the impression that they are playing the album live in the studio. It is perfect. It is produced, recorded, and mixed extremely well. Listen to the harmonies, especially in the stunning “Baby (It’s All Your Fault)”.

Let It Burn is the album of the year for me. This is Americana played perfectly. This is an album that touches your soul, musically and lyrically, and stays imprinted. It will be the perfect winter album and the perfect soundtrack for life. GospelbeacH has not become the band they promised they would be — they surpassed that promise.

Born and raised in Whitby, Aaron discovered music through his love of The Beatles. This led to a career in radio, writing for various publications, and ultimately a radio show about The Beatles (Beatles Universe), which ran for over four years. When not immersed in music, Aaron enjoys spending time with the loves of his life -- his wife Andrea, and daughters Emily and Linda (all of whom have an intense love of music too).
RELATED ARTICLES
album reviewalbum reviewsalive naturalsound
10