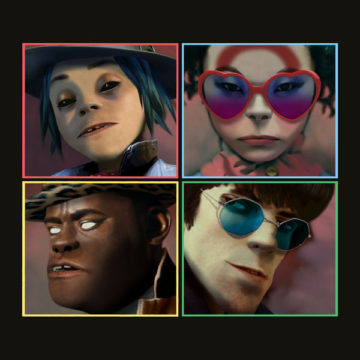 It’s safe to say Gorillaz is one of the quirkiest and most enigmatic acts out there today. The virtual hip-hop band, after seven years, makes their comeback with Humanz, with help from an all-star lineup of collaborators.

In a word, Humanz is astronomical. From the aesthetic of the album promotion and design to the spacey synths, there’s a certain tone that carries through the album that transports the listener to a cosmic space. Humanz is in-your-face, it’s ethereal, it’s playful and it perfectly encapsulates the character that is represented by the band’s rather bizarre nature. This is effortlessly conveyed in the glitch-hoppy sonic landscape that encapsulates most if not all songs on the album. Shimmering synths, buzzy and twinkling leads, and plenty of pitch modulation are a common theme throughout Humanz, all of which do an excellent job at contributing to the soundscape that is uniquely Gorillaz. Tracks like “Ascension” and “Momentz” are punchy, fast-paced, and intense; especially with Vince Staples delivering an excellent flow on the former track. Humanz is a ride, and Gorillaz isn’t afraid to take you along the distance with them.

On the other hand, when the intensity and quirkiness is reined back a little bit and the vibe becomes a little more reserved, what is revealed is a sense of true musicality, groove, and swagger. Where “Momentz” is a song that throws the listener in several different directions, songs like “Strobelite”, “Andromeda”, and “She’s My Collar” allow for the listener to sit back and just enjoy the casual danceability that is brought to the table. Which is a good thing, because sometimes the intensity of the other tracks on Humanz can get overwhelming or tiring to listen to after it’s been repeated for a good number of tracks. Other tracks, such as “We Got The Power”, establish a happy medium between the two.

However, it is in the more laid-back and groovy tracks where Humanz shines its brightest. It’s the same kind of energy and exuberance that’s shown in droves in the rest of the album, but in a different and more confident way. “Strobelite” is the track that exemplifies this the most. The shuffling beat mixed with the astral-sounding high-pitched synths, when combined with the synth leads and the masterful vocal delivery of Peven Everett – whose soulful voice cuts like a knife right through all of the glitchiness – is an excellent combination. Other tracks, such as “Andromeda”, featuring “Broccoli” star D.R.A.M., and “The Apprentice”, the bonus track featuring vocals from Rag ‘n’ Bone Man, also accomplish this feat very well, albeit to a slightly lesser extent.

All in all, Humanz is a record that proves that Gorillaz are as strong as ever even after their absence from the music world. It’s an assertive and groovy collection of songs that takes you on a journey through the world that Gorillaz have created with their artistry. Humanz is a little weird, but that’s exactly what it aims to be – and it accomplishes this goal successfully, with enough assertiveness to pull you in every time you might think it doesn’t have you.

Kysan Kwan hails from Ajax, but is currently in the Music Business program at Berklee College of Music in Boston, Massachusetts. His love for music started in high school, where he went through his "rebellious teen alt-rock" phase before becoming open to all genres of music from EDM to smooth jazz. Kysan also is an enthusiastic concert photographer and has his own college radio show, where he seeks to introduce the American public to the best of Canadian indie.
RELATED ARTICLES
album reviewsandromedaascension
8.0