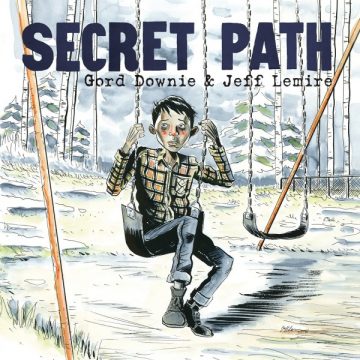 The Secret Path dares to become a wide and open road, an artistic plea of a dying man for change and reconciliation of a nation.

This is the fifth studio effort by the Tragically Hip singer Gord Downie, who continues to be a deeply important voice of the Canadian mosaic.  He is the author of the graphic novel which bears the same name, and is hauntingly illustrated by Jeff Lemiere. The graphic novel should not be taken for granted in its weight and importance as it is more than a mere companion or some after-thought.  Simply put, it is a deep and an integral part of experiencing Gord Downie’s painful plea for healing.

The Secret Path began as a simple collection of ten poems and took shape through a two day recording session at The Bathhouse Recording Studios.  Drew and Dave Hamelin played all the instruments, while Gord Downie tearfully sang about a little Ojibwa boy, who died alone, because he was not Canadian. The album includes guest artists Charles Spearin (bass), Ohad Benchetrit (lap steel/guitar), Kevin Hearn (piano), and Dave Koster (drums).

On September 9th, while visiting the Ogoki Post, Gord Downie released a personal statement that gives an important context for this release.  His brother Mike introduced Gord Downie to Chanie Wenjack through a story in Maclean’s magazine entitled “The Lonely Death of Charlie Wenjack”, written by Ian Adams, dating back to 1967.  Chanie died on October 22nd, 1966, alone, having escaped the Cecilia Jeffrey Indian Residential School, near Kenora, Ontario. It was a desperate attempt to walk home and be reunited with his beloved family, some six hundred kilometers away.  “He didn’t know where it was, nor how to find it, but like so many kids – more than anyone will be able to imagine – he tried.  I never knew Chanie, but I will always love him”, explained Downie.

The Secret Path is an album that attempts to re-write history (to tell the truth), preserve a  painful past, and to ultimately reconcile the immoral and misguided acts of the Canadian Government and the Christian Churches who undertook measures to assimilate and destroy a beautiful Indigenous civilization.  Please note that the last residential school finally closed its doors in 1996.  1996, not 1896!

“The next hundred years are going to be painful”, explained Downie in the release, “as we come to know Chanie Wenjack and thousands like him – as we find out about ourselves, about all of us – but only when we do, can we truly call ourselves, Canada”.

The Secret Path has great historical importance to our nation. The proceeds from the sale of the album and the graphic novel will be donated to the National Centre for Truth and Reconciliation as well as the Gord Downie Chanie Wenjack Fund.

Millions of Canadians united as a nation on August 22nd, to watch, honour, and remember Gord Downie as he said goodbye on a grand scale to his fans and all the lives that he touched.  Today, he continues to fighting a very private battle with an aggressive and incurable cancer.  At the time, and days after watching the Tragically Hip on CBC,  I remember hearing various rumblings of criticism that Gord Downie missed a wonderful opportunity to bring awareness to Glioblastoma.  In retrospect, The Secret Path, is nothing but a courageous indicator that he did something greater, something selfless, but perhaps something too subtle for people to notice.

Gord Downie, for many years, through his lyrics and music, has held the heartbeat of our nation in his hands.  It is still very much unimaginable that he is leaving us, but his departure is lighting a path from a horrid past, into a momentous future.

Next summer, Canada will celebrate the 150th anniversary of a nation, but it will take longer than that to undo the sins of our founding fathers and set a course in a new direction.  “This is far from over”, Downie explained.  “Things up north have never been harder.  Canada is not Canada.  We are not the country we think we are”.

The Secret Path is a tough listen.

This review is difficult to write.

It is impossible to dismember the album into small segments and discuss their individual merit and artistic importance. I leave that to other writers. The writers that are more important, have more education, and perhaps a stronger vocabulary. The real critics.

I think it is important to stop writing right here and encourage you to just listen.  If you are more courageous, I hearten you to read.

Go on a journey with Gord Downie and meet Chanie Wenjack on the secret path.  While others are bound to forget, remember him, especially while the fireworks light up the sky, distracting us from looking into the eyes of our Indigenous brothers and sisters.

Grzegorz Kieszkowski originally hails from Bydgoszcz, Poland. After his father was released from prison in 1984, for his involvement with the Solidarity movement, Greg and his family escaped to Canada in 1985. He makes Cobourg his home, along with his wife and two small children. Greg is a graduate of York University, with a double major in English and Philosophy. Music has always been in his blood, and although his tastes have matured, he will always have a soft spot for the Metal days of the late 1980’s. He is a full time English teacher and a professional photographer. Part of the allure of writing is the possibility of conversation, and he would love to hear your comments and opinions. Please feel free to visit his personal website - grzegorzkieszkowski.com.
RELATED ARTICLES
album reviewsarts & craftsbathouse recording studios
8.0