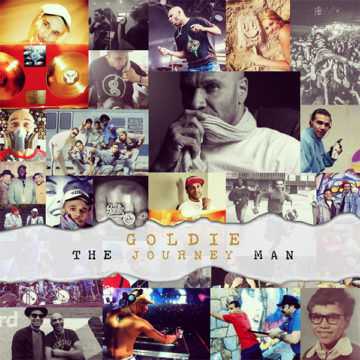 The Journey Man, is, in fact, itself a journey.

It’s got the backbeat sound that Goldie’s known for; a little bit of electronic, add some synths, and sometimes a sultry voice.  The latter half of the album is a bit more jazzy, and while it’s not necessarily a bad thing, the shift in sound is a bit unexpected. Nonetheless, Goldie orchestrated a solid album, featuring different sound effects, vocalists, and some solid drum beats.

Goldie has dipped his toes in all sorts of creative experiences. Back in the ’80s while he was still known as Clifford Price, Goldie had joined a breakdance crew by the name of Westside, and another called Bboys. The British artist was later known for his graffiti artwork, was featured in a documentary and book on the subject, and even took part in competitions. His music career began in the ’90s with baby steps by being featured in songs and working with various artists. His first studio album, Timeless, was released in 1995. He had a few acting roles as well, but as far as music went, there hadn’t been another solo studio album since 1996 – until now.

As mentioned before, The  Journey Man is an electronic album with a lot of upbeat, easy-to-get-lost-in music. It’s opener, “Horizon”, is a great way to start off the album. It starts off simple, then works its way into something more complex and funk-like. What follows after, “Prism”, is a track that really stands out. It has an old school video game arcade sound, heavy on synths and is a great pick-me-up. There are several songs on the album that are uplifting and energizing, such as “Castaway”, making use of trumpets to give it an extra oomph.

“Redemption” marks the second half of the album. It starts off slower with strong vocals and a beat just as similar to those before it. Somewhere in the middle it changes pace and transitions into a different song with a heavier bass and percussion-dependant. It’s an interesting way to kick off the second half, using it as the middle ground between the two sounds featured. What follows is a mix of jazz and lounge music. “Tu Viens Avec Moi” is an absolute gem. The combination of physical instruments and pre-programmed sound has never been more intricate and beautiful.

Once in a while, a ballad will arise that sounds somewhat out of place. “Truth” is one of these. As beautiful the lounge room song as it may be, it doesn’t necessarily fit where it was placed. At this point, it doesn’t need to. With something as creative as backbeat and jazz made to fit on a single album, rules and guidelines for music making get thrown out the window and don’t matter.

Goldie may not have released an album in over ten years, but that hasn’t stopped him from releasing something of quality.

Music and writing have always been a big part of Sabrina's life. She would "borrow" her dad's rock and metal CDs from his collection and listen to them while going through the art books. Although she doesn't write angsty poetry anymore, she does have a Bachelor's Degree in Journalism which she uses to pursue a creative career path. When she's not writing, Sabrina can be found juggling a coffee cup and DSLR or Instagramming her food.
RELATED ARTICLES
album reviewscooking vinylmetalheadz
9.0