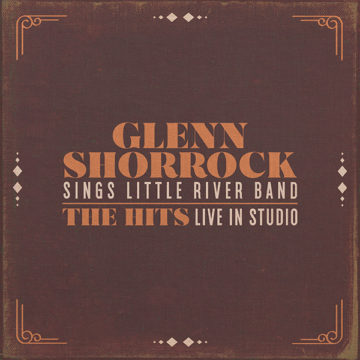 It has been over two years since fans have heard from Glenn Shorrock, and he has been missed. Although his career has spanned 50 years, he is probably best known for being the lead singer of Little River Band from 1975 to 1982 and from 1987 to 1996. He has also released a number of brilliant solo albums, the most recent being 2016’s Rise Again.

For Glenn Shorrock Sings Little River Band: The Hits Live in Studio, he has assembled a number of very talented musicians to record an album interpreting Little River Band’s biggest hits. It must be noted that Shorrock is not just recreating old hits, but presenting new arrangements of some of the last century’s best-known songs.

Producer Steve Balbi of Noiseworks often brings new areas of songs to the surface. “Reminiscing”, for example, has a jazzier, more melancholy mood that will make listeners appreciate the song on a new level. The harder rock element of the first single, “The Night Owls”, is amplified on this version.

Most of the hits are on this album (though “Happy Anniversary” is surprisingly absent) and Shorrock gives them a modern edge. “Cool Change” sounds better than the original, and is more relevant today than it was in 1978.

Recording the album live in a studio adds energy to the project, which ultimately sounds like an artist enjoying himself and the music he made in the past. Perhaps this is not the followup to Rise Again that fans were expecting, but if they give it a chance, they will embrace Glenn Shorrock Sings Little River Band: The Hits Live In Studio.

Born and raised in Whitby, Aaron discovered music through his love of The Beatles. This led to a career in radio, writing for various publications, and ultimately a radio show about The Beatles (Beatles Universe), which ran for over four years. When not immersed in music, Aaron enjoys spending time with the loves of his life -- his wife Andrea, and daughters Emily and Linda (all of whom have an intense love of music too).
RELATED ARTICLES
album reviewalbum reviewsglenn shorrock
10