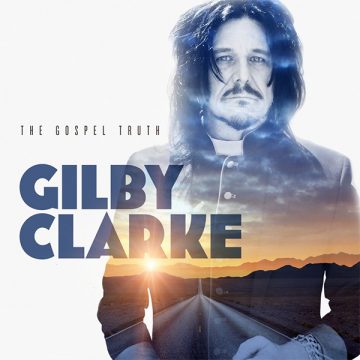 The Gospel Truth opens with a standard hard rocker of a title song. What makes the bass and drums driven-verse standout is the occasional accent from a horn section and female backing vocals. While sparse, they add a dynamic element to the track that is firmly rooted down in Clarke’s ‘80s guitar riffs and licks. The use of additional instruments is furthered on the following track, “Wayfarer” which sees the warm tone of an organ take the lead while Clarke’s gruff vocals and crunching guitar give the song a strong classic rock vibe.

Clarke doesn’t aim to fix what isn’t broke and, as a result, The Gospel Truth refuses to stray from the middle of the road. Songs like “Wise Old Timer”, “Make Me Smile (Come Up And See Me)”, and “Rock N Roll Is Getting Louder”, for better or worse, feel quite standard. When he does let loose, even in the slightest, however, The Gospel Truth truly shines to the level one would expect from a former member of Gun N’ Roses. “Tightwad”, featuring Sixx, is perhaps the best example of this as the track bridges a sense of melodicism with a level of grit that elevates the song above the rest. Similarly, the explosive closer, “She Won’t Fight Fair”, the slow-burning “Dangerous Sin”, and the up-tempo blues rocker “Violation” are additional highlights.

For his first solo outing in almost two decades, Clarke does not return with quite the bang he had hoped. While The Gospel Truth is not a bad album at all – the songs are well-written and Clarke and the band perform as a tight unit – it feels like it suffers from a lack of the high-octane rock one would expect from Clarke. Despite this, The Gospel Truth is an enjoyable classic rock record nostalgic for the late ‘70s and delivers a fitting vibe.

A passion for music has always been a part of Gerrod’s life. As a young boy, he was raised on a steady diet of the music from The Chili Peppers, Aerosmith, The Stones, Prince, and others from his mum. Raised in the GTA, Gerrod continued to foster his love for music by attending a wide range of concerts and learning the drums. His unapologetic passion for music has no bounds and has spread to a wide variety of styles, whether it be the 90’s rock that sound tracked his teenage years, the jazz he studied in university, or his newfound love for hip-hop. He recently received his bachelors in music and education from York University and is passionate about writing and reviewing good (and less than good) music. Gerrod is also the drummer and songwriter for a Toronto based rock & roll band, One In The Chamber.
RELATED ARTICLES
album reviewalbum reviewsguns n' roses
7.0