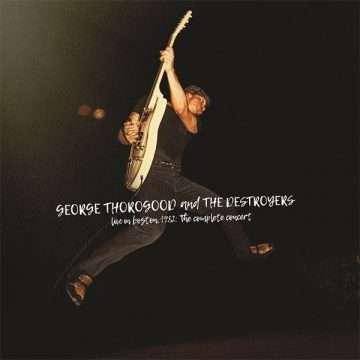 George Thorogood And The Destroyers
Live In Boston, 1982: The Complete Concert
Craft Recordings

George Thorogood has been making music since the early 1970s, with his roots firmly grounded in the Delta Blues. However, when he formed The Delaware Destroyers in 1974, with his friend, drummer Jeff Simon, his sound shifted from the Delta to Chicago. He threw in some pure rock and roll and he developed his own distinct sound. The Delaware Destroyers became simply, The Destroyer. His debut album, George Thorogood And The Destroyers was released, by Rounder Records, in 1977. He had arrived on the scene.

This album, Live In Boston, 1982: The Complete Concert shows Thorogood and his band in fine form. The album has been released before, in 2010 by Rounder Records, but it was only part of the show. That version featured 13 tracks, while this is the full 27 songs. Recorded before a very enthusiastic and appreciative audience, Thorogood and his Destroyers burn through their set with energy that is not always heard on a live album.

For this album (and tour) the Destroyers feature Simon on drums, Billy Blough (bass), Jim Suhler (rhythm guitar), Hurricane ‘Hank’ Carter on saxophone (listen to his performance on “Wild Weekend”, it is outstanding) and former Rolling Stones member, Ian Stewart on keyboards. It was the only tour in which Stewart appeared as a member of the Destroyers.

The hits are here, “Who Do You Love”, “One Scotch, One Bourbon, One Beer”, “Night Time”, “Nobody But Me” and “Cocaine Blues”. But they pull out a few surprises, such as the rocking “Kids of Philly”, the very bluesy “As The Years Go Passing By” and the full on assault of “It Wasn’t Me”. Just listen to Thorogood’s remarkably quick finger-picking on this one. If that doesn’t get your pulse going, not sure anything will.

Live In Boston, 1982: The Complete Concert is exactly as advertised. It is a well recorded and well-produced live album and it sounds live. Too many live albums lose something when they are overproduced for record. Here, Thorogood lets the band do their thing and it was caught on tape. We are all the better for it. Thorogood and his band give a crash course on how rock and roll with the blues should be done.

Thorogood brought together a tough, tight unit to play straight ahead rock ‘n’ roll with a deep injection of the blues. He, along with his band, succeeded. The band is like a nicely run team, such as in baseball. Thorogood, a huge fan of the sport,  played baseball and could have made it as a career. Thankfully he went into music and carved out his own distinct spot in rock and blues history. Not bad, for a Mets fan.

Born and raised in Whitby, Aaron discovered music through his love of The Beatles. This led to a career in radio, writing for various publications, and ultimately a radio show about The Beatles (Beatles Universe), which ran for over four years. When not immersed in music, Aaron enjoys spending time with the loves of his life -- his wife Andrea, and daughters Emily and Linda (all of whom have an intense love of music too).
RELATED ARTICLES
album reviewalbum reviewscraft recordings
8.0

by Matt Owczarz on January 1, 2021
The Dirty Nil Fuck Art Dine Alone Records Fuck Art is the third studio album from the Hamilton, Ont.-based The Dirty Nil, in which they reaffirm their commitment to keeping the spirit of [...]
10

by Aaron Badgley on December 18, 2020
Paul McCartney McCartney III MPL/Capitol Paul McCartney has always used music to get through difficult times. In 1970, when the Beatles split, he came out with the classic McCartney in [...]
9.0