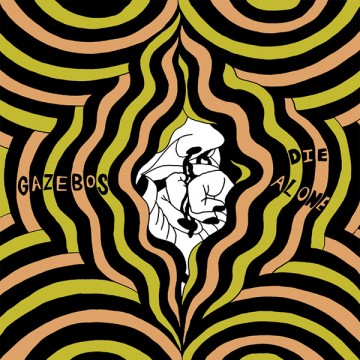 One element of music that continues to smash windows of expectation, regardless of decade, genre or nationality, is a voice. Someone with something to say and a new way of saying it. Gazebos’ Shannon Perry has one hell of a voice, and on Die Alone she uses that screech and murmur to pierce through the turquoise mold of morbidity. This is a record obsessed with death, but in a universally apathetic way. By borrowing the freak-rock sensibilities of Zappa and electronic nuance of Talking Heads, Gazebos have re-purposed their indie rock into a Hellenistic, sculptural statement. Die Alone is The Winged Victory of Samothrace, except she’s unemployed, smoking a cigarette, and smug about impermanence.

Opener “Just Get High” is honky-tonk on acid; a kaleidoscopic rendition of Bob Dylan’s “Rainy Day Women #12 & 35” that mirrors the famous chorus of “Everybody must get stoned.” The vocals strain and soar, with Perry cawing tie-dye aphorisms like “death is not important, let’s not waste too much of its time” before ending on a mumbled sweet-nothing that may or may not involve cheesecake.

“Maintenance” is one of the album’s most direct tracks, and jogs in a perfect circle with the lyric “We don’t have the time to make things right/Think all day, talk all night” hinting at the recursive nature of fractured relationships. It devolves into an abandoned motel-jazz diddly before cliffhanging on “The future is…is…is…is…”

“I Don’t Wanna Be Here” is the album’s lead single, and for good reason. Perry booms “Queen of the street/I’m not a piece of meat” with the fervor and precision of a young Grace Slick, then sneers “What power do you seek over people? – it should be nothing” in a voice so loopy you can practically see a Don Van Vliet moustache sprouting over her lips.

And on no track do Gazebos halt this balancing act of devastation and humour. “Blend” finds them at their most snide with “Take me to the river and throw me in” shortly followed by “Progress with its hiccups….and love, love with its hookups.” And finally, the chant of property and propriety: “Take a bath with your clothes on its fine, take everything I’ve got, it’s not mine if I’m yours.” It is on this track more than any other that Perry’s recent infatuation with the Talking Heads becomes apparent – something she shares in common with another female alt-rock vocalist, namely recent Grammy-winner St. Vincent (who spent almost an entire year touring and recording with Talking Heads vocalist and mastermind, David Byrne). Die Alone can almost be seen as an existentially troubled, freak rock version of St. Vincent’s sugar-plum debut Marry Me.

“Ere Specka”’s infectious “No other, no other” callback is followed by the witty “Sauna” which lists “things one can do to make it better” (trying on new shoes and cleaning your mouth out with soap, for starters), and all this amidst the prescient “Take a breath while you gottem/You’re gonna sink to the bottom”. How’s that for forlorn optimism?

“There Are Worse Things I Could Do” is a cherry-bomb ballad that appropriates the cool-jazz ethos of “The Night Has A Thousand Eyes” as covered in the 1998 cult-classic “Dark City” but swaps the smoke-and-mirrors for skeletons in lawn chairs. Drained of bombast and loaded with character, lines like “Take cold showers every day/And throw my life away/On a dream that won’t come true” sound like Kim Gordon covering Amy Winehouse at 4am, about three beers past clarity.

The delirious incantation of “You are not, allowed, to see/Andpleasestoptakingthosepills” on penultimate track “Not Allowed” is a resurrection of the famous Lou Reed/Nico vocal dynamic. But the tempo redshift combined with Perry’s voice (which is decidedly more colourful than Nico’s) make it feel more Gazebos Underground than Velvet.

The ninth and final track, “Boys I Like” opens with a chant of “I don’t like the boys who like me, and the boys I like don’t like me back” – a bright contrast to the Taylor Swift-ian dins-of-romance narrative we were straw-fed for most of 2015. The song then whammies into wobbly ska guitars, soon chased by what is undoubtedly the most gleeful pre-chorus I’ve heard in years: ‘Weeee are all goin ta’ diiiie alone.” Near the end, in a brief moment of lifelessness across the album, the track fades out…only to contradict everything said about the finality of death by thundering back to life with a hands-in-the-air synth solo that hovers over drum, bass and guitar chaos before slipping into sweet, happy, acceptable death.

What Gazebos provide more than anything is a new voice. A new voice. The nail polish and nosebleed album cover is indicative of the soul-bearing, body-fluid-leaking truth that resides within these nine tracks. Life and death narratives are often told with grandiosity; an attempt to capture “it all” by scaling up the scope and extravagance, which is both unnecessary and untruthful. Die Alone does the opposite – matching death with the little things, the funny things, the lively things. When Shannon Perry sings “We are all dying right now. I’m dying right now. Every single one of us is dying, together, right now” it’s as if she’s reciting an imaginary epilogue from Camus’ The Stranger. With Die Alone Gazebos have provided a roadmap to happiness; happiness that lies, by their estimation, somewhere at the crossroads of Tune Yards avenue and Parquet Courts drive – roads that can only be navigated by proud, defiant submission to the inevitability of “it all”. Is that absurd? Absolutely.