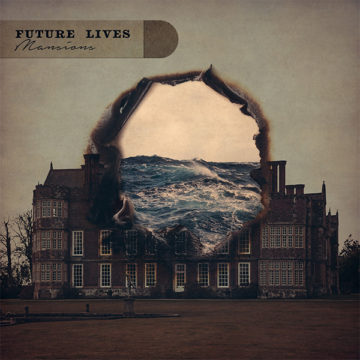 There are a lot of players on Mansions by Future Lives. However, this huge ensemble is based around Brandon Taj (of King of Prussia fame).  He is the centre point of this album, which features some of his friends, who also play for well known bands.  Included in this list is former Drive By Truckers and current member of Japancakes, John Neff, who provides remarkably tasteful pedal steel player. Add to the mix, Nick Robbins of Velveteen Pink on drums, and his sister, Sarah Robbins adding some stunning vocals.

So, what does all of this add up to, you might be asking. Well, one of the finest albums of the year. Pure Americana at its absolute best.  There really is not a wasted second on this album. It is a beautifully produced and mixed album. While there is a great deal of orchestration, and at times many players, it never loses its space. There are moments when the quiet contributes to the song as if it was an instrument.

It is tempting to fall into cliche statements about this album, but it truly is achingly beautiful. The song “Stumble On” features atmospheric harmonica to punctuate the tune and the heartbreaking lyrics. Mixed in with the orchestration and Taj’s hurting voice, it just comes together in perfection.

Then contrast “Stumble On” with the bare bones, acoustic song “The Strangest Dream”.  ‘I didn’t ask, because I knew the answer’, Taj sings ‘I couldn’t take the pain this time.’ The addition of the two words “this time” makes the song even more painful.  But it is a beautiful pain.  Robbins adds subtle harmonies, and again it all adds up to a perfect song. Hard to listen to, but stunning in its sadness.

At times the sadness stretches, for a brief moment into anger (listen to “Quotes” just over a minute and a half).  And there are times when his influences come out very strong. “Continental Drift Divide” sounds as if Leonard Cohen discovered country music in its purest sense, mainly due to the arrangement of the backing vocals in contrast with the lead vocals.

The album is about loss, and desperation. No happy endings here, but there is hope, hope that things will turn around, but we all know how that works out.   Mansions is a surprise. In this year of “supergroups”,  this is one of the best (second only to Planetarium) and the success is possibly due to the vision of one artist with support rather than everyone trying to compete. What is the old saying about ‘too many cooks. On this album a number of artists contribute but it is really Taj’s album, and quite the stunning album it is.

Born and raised in Whitby, Aaron discovered music through his love of The Beatles. This led to a career in radio, writing for various publications, and ultimately a radio show about The Beatles (Beatles Universe), which ran for over four years. When not immersed in music, Aaron enjoys spending time with the loves of his life -- his wife Andrea, and daughters Emily and Linda (all of whom have an intense love of music too).
RELATED ARTICLES
album reviewsdancing with the stars
8.0