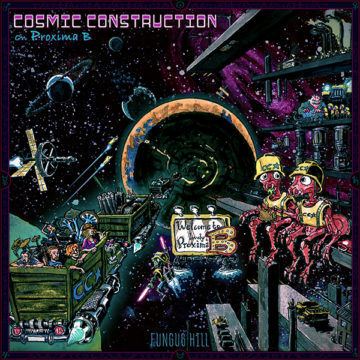 Buckle your seatbelts, this is not your usual rock album. Fungus Hill have brought us something different, yet something old. Cosmic Construction On Proxima B is a concept album, a science fiction story about the end of Earth and the move to a new planet. I am simplifying this story, but that is the gist of it. Fungus Hill tell the story with narration, music and wild psychedelic/prog rock arrangements. This album is a trip, both in the story and musically.

Cosmic Construction On Proxima B is the debut album for this Swedish band. They have released two singles and an EP,  issued in 2017 and entitled Creatures, but those songs are not found on this collection. This is all entirely new music. The band consists of Erik Sköld (guitar), Nils Mörtzell (drums), Gustav Orvefors (guitar/vocals), Tom Westerlund (bass) and Jenny Isaksson (vocals & percussion).

Fungus Hill spent two weeks in a cabin in northern Sweden. When they went into the studio they made a decision: no overdubs, almost live recording. They deserve a great deal of credit for their ambitious approach to a debut album, and it is fantastic to hear music played by human beings, and I must be honest, I like prog rock and psychedelia, so this album is kind of right down my alley.

The album begins with narration (“Year 2199”), setting the scene and beginning the story. In the process they are getting you ready for the journey, and it is off we go, across the cosmos. Of course the trip does not go as planned and many difficulties are encountered along the way, until the destination is reached (perhaps the highlight of the album, “Year One”). Along the way there are some great songs and some extremely brilliant playing. These guys know their stuff and they are one tight unit. The guitar work is stellar, and given that this album is pretty well recorded live off the floor, it is even more impressive.

Actually the playing on Cosmic Construction On Proxima B is strong and they use many different instruments, including the human voice. The vocals on the album are breathtaking, especially those of Isaksson, who provides her own styles throughout. At times her vocals are almost unearthly, and in combination with the band Fungus Hill, she and the band become a force with which to reckon.

There are shades of Zappa sprinkled throughout the album, and at times it is as if Led Zeppelin and Pink Floyd magically morphed into one band. However, Fungus Hill are not derivative, they do have their own distinct sound. Their style is definitely their own and what they are doing in 2018 is very original.

Cosmic Construction On Proxima B is an ambitious album and quite good. There are moments of genius and moments of good old fashion rock, prog rock, but rock. This band has come up with a strong and unique debut album. It will be interesting to watch them grow and develop.