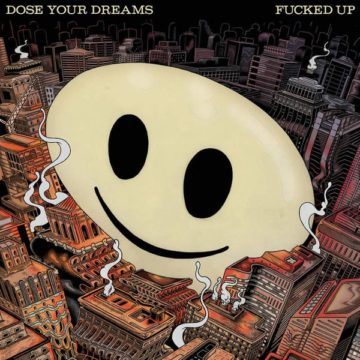 Dose Your Dreams is an hour and a half long epic experimental concept project from Toronto-based band Fucked Up. The band’s fifth LP release is a true testament of their creative ability to push experimental boundaries in the hard-core genre. The album departs sonically from previous releases and the resulting sound is refreshing.

The music has elements of everything from power pop and disco to industrial and punk, featuring Damian Abraham’s familiar growling bellows. He has noticeably taken a creative back seat as the album was predominantly conceived from lead guitarist Mike Haliechuk’s artistic vision.

The narrative follows the character David (returning from David Comes To Life) in his struggle with mundanity in the oppressive nine-to-five grind. He finds comfort from a shamanistic guru named Joyce Tops that guides him through a mystical musical persuasion of self-acceptance. Haliechuk has admitted this may be a reflection of his own journey, navigating an atypical life in a weird world.

Themes of anti-capitalism, greed-shaming and corporate oppression maintain the pure punk resistance attitude. The layered vocals in each track are often in good company with features from an extensive list of notable artists. The echoed female vocals highlighted on many of the songs are an effective contrast to Abraham’s intensity.

The album in its entirety has certainly elevated Fucked Up to a new level of progressive creative stature proving they cannot be pigeon-holed as solely a hard-core band. This, no doubt, will keep us guessing as to what’s next.

Nicole Swanson has recently made the move to Toronto from Fernie, BC, trading mountain life in pursuit of a career in the music industry. She can usually be found at live shows throughout the week, always in search of great new music.
RELATED ARTICLES
album reviewalbum reviewsarts & crafts
8.0