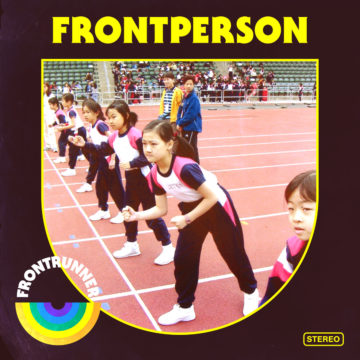 Frontperson sees Mark Andrew Hamilton (Woodpigeon) and Kathryn Calder (Immaculate Machine, The New Pornographers) intertwining their misty and sombre sensibilities into a dark, but ultimately hopeful debut release. Hamilton’s most recent work with Woodpigeon, the sparse and dower T R O U B L E, solidified a singular and vulnerable vision for the project. Meanwhile, on the other side of the Rockies, Calder has been stewing her low-tempo synth-coloured solo material into a similar emotional space, but with an entirely different tonal palette. Though you might not have heard these two Canadian indie heavyweights mentioned in the same sentence before, their melding into Frontperson is seamless. This is a real band, even if their previous careers are hard to dismiss when Frontrunner’s vast opening drums kick in.

Frontperson carefully balances its folk-hearted songwriting and acoustic instrumental beds with subtle synths and drum machines. Hamilton and Calder’s voices are heavy and wavering in the mix, dry and mostly unaffected in the leads and brilliantly airy in the pulsing, reverberant harmonies. Their deliveries are similarly intimate in their imperfection, and they meld extremely well, although Calder’s vocal sits markedly better as harmonies above Hamilton’s than Hamilton’s are over Calder’s.

The album’s quieter moments are the most impactful, many building into the most colourful swells and breakdowns like the sci-fi synth on ‘Long Night.’ These moments introduce big memorable melodies that help the longer tracks like ‘He Follows me’ earn their length and maintain a rewarding headphone listen throughout.

As a music industry professional, Liam has seen all sides of the industry. Working as a venue and operations manager for the Calgary Folk Music Festival, specifically their stunning black box concert hall Festival Hall, he has put on countless concerts and music events. In the evenings you'll find him writing bios and copy for artists as well as shooting promotional and live still photos for bands and presenters. You might even see him brewing up his own introspective and self conscious anti-folk in Calgary's DIY music seen as well. His palpable musical network and knowledge of every facet of live music production make him an invaluable resource. He is currently at the Canada's Music Incubator Artist Manager Program in Toronto. (Photo Credit: Michael Grondin Photography)
RELATED ARTICLES
album reviewalbum reviewsfrontperson
7.0