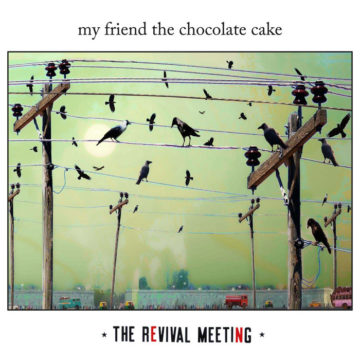 My Friend The Chocolate Cake
The Revival Meeting
Independent

My Friend The Chocolate Cake have been around since 1989.  The two founding members, David Bridie (piano/keyboards and vocals) and Helen Mountfort (cello and vocals)  came out of the 80’s Australian band, Not Drowning, Waving.  The Revival Meeting is album number eight from this band, who are based in Melbourne, Australia.

To be honest, I did not know what to expect when I hit play on this album. But what I got was an exquisite album full of audio murals with lyrics to match.  The Revival Meeting is an album unlike any other, combined genres, images, instruments and lyrics not found in much of today’s music.  This is not a throwback, or retro album, sure their influences dip into folk, maybe even classical.  But it is their own sound.  The instrument “Middle Velt” is a good example of the classical influence, but it is much more, an emotional bridge between songs about hopes, and failings.  Brilliant.

David Bridie has said that the album is “a collection of songs in which the protagonist (who could be you, who could be me, who could be the woman next door) is trying to find their place in an increasingly mad world…”  A lofty goal, that he achieves.  Each song tells its own story, some happy, some sad, some depressing, but each story connects with the idea of trying to figure it all out.

The playing is top notch, and the album is beautifully produced.  David Bridie, who wrote the album, provides strong voice and piano.  He also produces some of the finest lyrics heard this year.  “Won’t you come with me down to the soil, Get honest pay for honest toil…this is just another year.” he concludes in the song “Another Year”.  Meanwhile his piano playing, combined with Helen Mountfort;s cello and Hope Csutoros’ violin, creates an incredible sense of melancholy throughout the whole album.

“We’re forever blowing pretty bubbles in the air…they fade and die up there with our dreams” Bridie concludes near the end of the album with “The Fire Turns To Embers”, not a comforting thought but not depressing either.  Just an acknowledgement.  A fine, almost painful ending to this journey throughout the album.  Again, the instruments punctuate this song and throughout the album.  The last track “Jim’s Refrain” an astounding instrumental that seems to sums up the album and brings the album to a suitable ending.  Beautiful playing and leaving the listener with their thoughts and emotions stirred up for the past 45 or so minutes.

This album is a work of art, and one that makes me reach back into their catalog, but for my ears, this is their best and their most accomplished album to date. It also features one of the finest album sleeves I have seen this year. Brilliant work.

Born and raised in Whitby, Aaron discovered music through his love of The Beatles. This led to a career in radio, writing for various publications, and ultimately a radio show about The Beatles (Beatles Universe), which ran for over four years. When not immersed in music, Aaron enjoys spending time with the loves of his life -- his wife Andrea, and daughters Emily and Linda (all of whom have an intense love of music too).
RELATED ARTICLES
album reviewsmy friend the chocolate cakethe revival meeting
9.0