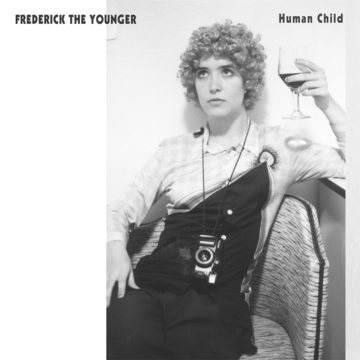 It is not very often that an album can lead you on a psychedelic trip into worlds beyond your imagination, but Frederick The Younger has accomplished such a feat with their new album, Human Child. The explosive 11-song compilation features Jenni Cochran’s skilled vocals that conjure up emotional soundscapes, John Barrera’s absolutely perfect vintage Fender Mustang guitar sound that lingers on his wailing high notes, and a rich composition of layers that utilize instruments not typically heard from a psych-pop band.

Cochran’s voice has a full range of emotions at hand that she delegates appropriately to the theme of a given song, striving toward a theatrical mastery similar to David Bowie or Freddie Mercury. In “Tell Me”, a song about asking to be treated better, Cochran alternates between dramatic and defeated and hurt. Her tongue-in-cheek tone that plays with a British accent shows that she feels pompous for proposing these standards onto someone, admitting that she is unsure whether she is justified to ask for more. In “Lioness”, Cochran leads us through a marching ballad about teaching someone how to love. She repeats the line “you gotta train your heart” with a controlled growl that is careful to not let the power of her emotions take over her composure.

Cochran’s voice is echoed by Barrera’s Fender Mustang guitar that brings in an element of grimy surf rock through its fuzzy high notes, tremolos, and wavering bends. It often comes in after the line of a verse, expanding on the proposed melody. Sometimes, however, it delightfully breaks free into a full-on guitar solo that transforms deep emotions into howling, sublime riffs. This is best done in the first song “Horoscope” where Barrera introduces a simple but evocative broken chord of short notes that is reminiscent of 90s alt rock. The effect feels mournful, like it’s crying out for salvation, which is an appropriate emotion for a song that repeats “you’ll meet someone who’ll break your heart/you’re gonna break” in the chorus.

Human Child is sometimes at risk of being unoriginal: its songs use simple melodies that speak of love and heartbreak, themes that are all too often used in pop songs. However, Frederick The Younger successfully avoids blandness through their rich textures, dynamic emotions, variety of instruments, and skillful execution. As a budding five-piece band, Frederick The Younger has developed a unique sound that will surely distinguish them as a band to watch.

Raised among downtown Vancouver’s thriving underground indie music scene, Josie moved to Toronto to study architecture and to check out the self-titled “music city.” She is now on the hunt to find the intersection of music and the built environment, and thrives on exciting collaborations with creative individuals.
RELATED ARTICLES
album reviewslionesstell me
8.0