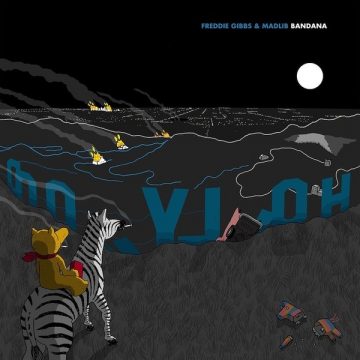 The long-awaited followup to Freddie Gibbs & Madlib’s Piñata collab album released in 2014 is finally here. After five long years, we can once again bask in the undeniable chemistry between one of the greatest producers hip-hop has ever known, and one of the most ingenious and original lyricists of the last decade.

Bandana is exactly what you would expect out of these two master-craftsmen in the best way possible. What makes this project so special is at their core, Freddie Gibbs & Madlib will not bend or break for what is popping. The two have earned their stripes and have done so doing exactly what works for them. There isn’t a beat Gibbs can’t slaughter with expert, thought-provoking lyricism. There isn’t a sonic formula Madlib can’t create that won’t leave you speechless with neck pain from excessive head nodding.

The album is sample-heavy in true Madlib fashion. Along with the undeniable rap stylings of Gibbs the album can be played front to back without skipping a beat. Not only do they do exactly what they came to do, the features for this project were chosen with precision and shattered the bullseye they were aiming for. It’s rare on a rap album in today’s climate to have all features be spot on with not one verse lacking, but these two bring it out of the artists they surround themselves with. The album features the likes of Pusha T, Killer Mike, Yassin Bey (FKA Mos Def), Black Thought and Anderson.Paak.

The standout on the album would be the track “Practice” for Gibb’s ability to check his tenacious ego at the door and let his soul bleed all over the mellow and melancholic production, communicating the trials and tribulations that burden one of hiphop’s last genuine lyricists.

Overall, hiphop purists can rejoice and enjoy a solid effort by two of the most respected creators that remain in the genre. Hopefully, we don’t have to go another five years to hear from these two again, but if we do, we will have this album to keep us satisfied in the meantime.

J.D. McIvor is a journalist covering Arts & Entertainment whenever possible. Serving a genuine passion for the arts, McIvor is constantly looking to bridge the gap between creativity and the importance it plays in our everyday lives.
RELATED ARTICLES
album reviewalbum reviewsfreddie gibbs
6.0