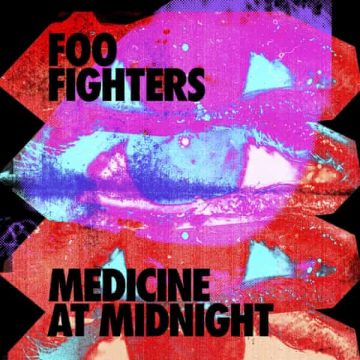 For the past 10 years or so, the Foo Fighters have without question been the biggest band in the world. This was solidified with their mega-hit record, Wasting Light in 2011. While their 2014 follow-up Sonic Highways floundered with its middle of the road rock, Concrete And Gold saw the band return in 2017 with what was perhaps their most experimental and creatively charged album to date. Now, their highly anticipated Medicine At Midnight sees the band attempt to find balance between modern hard rock and artistic experimentation while digging deep into their classic rock roots of the ‘60s and ‘70s.

Who in the world opens a rock record with a song in ¾ time? Dave Grohl and company sure as hell do with the rhythmic guitar crunch led by Taylor Hawkins’ off-centred beat on the album opener “Making A Fire”. Much to my own surprise, and the likely disappointment of many, Foo Fighters have a habit of opening their albums with their biggest and heaviest of songs – “The Pretender”, “Bridge Burning”, and “Something From Nothing” but rather a bouncy alternative rock track that feels as if it should be bigger. It’s an interesting direction that, especially when you factor in the lush backing vocals, feels a touch psychedelic and very much in tone with the upbeat work from the likes of The Beatles and David Bowie. In my opinion, it is the following track, “Shame Shame” that is truly captivating as it creates an aura of darkness and is among the best tracks on Medicine At Midnight. The haunting alternative piece feels like it was taken straight from the melancholic songbook of Queens Of The Stone Age and, when it was released as the lead single in 2020, left me more intrigued for the direction of a Foo Fighters record than I ever have. Dare I say, “Shame Shame” may very well stand among my favourite songs from the band.

Curiously, there is a slight funky feel that bounces throughout Medicine At Midnight on tracks like “Cloudspotter” and the title track. The former is driven by a slinky guitar riff and stunning vocal harmonies between Grohl and his daughter, Violet May Grohl, before exploding into a massive rocking chorus, while the latter has an alternative pop-rock feel to the verse that builds up to an emotionally charged chorus that, between the organic flow of these seemingly juxtaposing parts, feels nostalgic for the songwriting of Tom Petty. The same very much can be said the ballad, “Waiting On A War”. Yet another highlight is the tight groove of “Holding Poison” and the unexpected bridge that seemingly sideswipes you through your speakers out of nowhere.

While I have always lamented that Foo Fighters should dig deep into their heaviest of influences and reject their mainstream tone for an edgy and aggressive, borderline metal sound, Medicine At Midnight proves that the band can be just as energized and compelling when they go the opposite direction into their softer and alternative tones. In fact, it is the heavier songs on this record where the band seems to meander, whereas the ballads and alternatively charged songs leave the band sounding as invigorated as they did in 2011. In many ways, Medicine At Midnight may be their most surprising and unique album to date that ultimately furthers the range and power of the Foo Fighter’s as both performers and songwriters.

A passion for music has always been a part of Gerrod’s life. As a young boy, he was raised on a steady diet of the music from The Chili Peppers, Aerosmith, The Stones, Prince, and others from his mum. Raised in the GTA, Gerrod continued to foster his love for music by attending a wide range of concerts and learning the drums. His unapologetic passion for music has no bounds and has spread to a wide variety of styles, whether it be the 90’s rock that sound tracked his teenage years, the jazz he studied in university, or his newfound love for hip-hop. He recently received his bachelors in music and education from York University and is passionate about writing and reviewing good (and less than good) music. Gerrod is also the drummer and songwriter for a Toronto based rock & roll band, One In The Chamber.
RELATED ARTICLES
album reviewalbum reviewsdave grohl
8.0