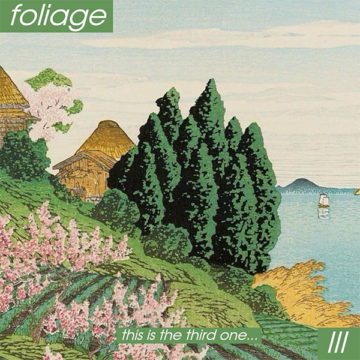 Foliage is a young indie act but isn’t new to the scene. He just released his third album entitled III. Foliage’s musical style is similar to that of Alvvays, but with a male singer. Foliage consists of simply one 20-year-old man: Manuel Joseph Walker.

The fact that Foliage is a single performer is only made evident on the album during the second song “How Have You Been?” The drum beat that kicks off the song is too robotic to be an actual person. It also just feels like a drum machine. The beat is catchy however, making it one of the better songs on the album.

The first song on the album “It’s Time” has made its way into a few Spotify lists: New Indie Mix and Dreampop. This is incredibly impressive for such a young performer. The whole album fits the dream pop subgenre so well it’s painful. The album has a dreamy mix to it all. It is really relaxing throughout the whole adventure. The twangy guitar topped on the consistent drumming makes the album an adventure. The vocals are just a bit too messed with, making them get lost in shuffle of it all. They seem to be put on the back burner for the beats. This isn’t necessarily a bad thing, just in this instance, it doesn’t add to the  feel.

III is a very consistent album that flows rather well. The biggest downfall is that all the songs sound a little similar. None are quite catchy enough to get radio play, but this would make for a strong album to relax to.

The Spill Magazine is a Toronto-based online publication dedicated to covering the independent music scene with a strong focus on our thriving hometown talent. Our writers bring you up-to-date news, in-depth features on musicians and reviews for the latest CD releases. We also travel to the front lines for all local festivals including Canadian Music Week and North by Northeast. Don’t forget to check out our Facebook and Twitter pages for all daily Spill updates.
RELATED ARTICLES
album reviewsiiiz-tapes
8.0