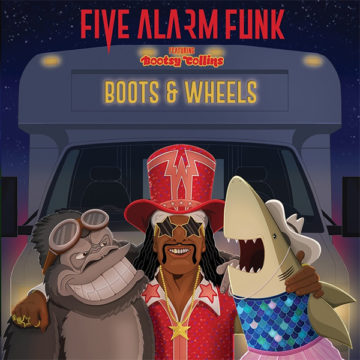 Vancouver based funk sensations, Five Alarm Funk, have released a two song EP titled Boots & Wheels. The short release is the first since last year’s full album, Sweat, and documents the bands collaboration with none other than the genre’s most revered bassists, Bootsy Collins on the first of this pair of songs. Collins, being one of the funkiest mofo’s around – having played with James Brown and Parliment-Funkadelic – joins the eight piece funk band- that includes guitarists Gabe Boothroyd and Oliver Gibson, bassist Jay Smith, drummer and vocalist Tayo Branston, percussionists Tom Towers and Carl Julig, sax player Eli Bennett, and trumpet player Kent Wallace- for a short but exciting record.

“We Play The Funk” starts off with an alarm in which the band members, along with Collins, slowly build a strong groove around the alarm until is gradually disappears and only the funk remains.  Musically, “We Play The Funk” is a highly original tune that seamlessly blends elements of classic 70’s and modern funk along with rock all in a fashion that feels reminiscent of George Clinton’s work with Parliment.  This track is an absolute banger and while rich with closely intertwined layers – including a strong off-beat pulse, accenting horns, slinky guitars, an assortment of layered vocals, and of course the fat bass from Collins – the song does not lose its simplicity despite how busy it is.  “We Play The Funk” is a party from an ensemble that does the genre justice in an era where funk is often watered down as the basis for pop music.

“Wheels On The Bus” is another track that feels equally energetic and only slightly more bombastic than the previous track. That being said, the song seems to lend itself to some of the clichés of jazz rock while the semi rapped vocals are incredibly cheesy  and feel like an afterthought considering all the additional work that was clearly put into this, once again, a densely layered track. That being said, “Wheels On The Bus” is an enjoyable song, it just does not feel right following Five Alarm Funk’s work with Collins.

While this pair of tracks is quite exceptional, it is clear that Five Alarm Funk’s collaboration with Bootsy Collins on “We Play The Funk” outshines “Wheels On The Bus”.  Were Boots & Wheels a single, it would be flawless, but as a release, “Wheels On The Bus” seems to detract- albeit, slightly, from the record’s overall impact.  Despite that, these are quite easily two tracks that can become instant favourites in a live setting and will still leave you flipping through Five Alarm Funk’s previously released material.

A passion for music has always been a part of Gerrod’s life. As a young boy, he was raised on a steady diet of the music from The Chili Peppers, Aerosmith, The Stones, Prince, and others from his mum. Raised in the GTA, Gerrod continued to foster his love for music by attending a wide range of concerts and learning the drums. His unapologetic passion for music has no bounds and has spread to a wide variety of styles, whether it be the 90’s rock that sound tracked his teenage years, the jazz he studied in university, or his newfound love for hip-hop. He recently received his bachelors in music and education from York University and is passionate about writing and reviewing good (and less than good) music. Gerrod is also the drummer and songwriter for a Toronto based rock & roll band, One In The Chamber.
RELATED ARTICLES
album reviewsfive alarm funk
9.0