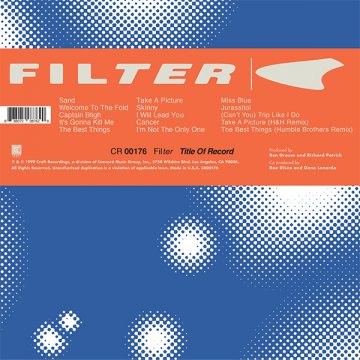 Twenty years ago, Richard Patrick shook the alternative rock world with the release of Title Of Record. While his band, Filter, had previously turned heads with their bombastic debut, ‘95s Short Bus, which spawned the iconic hit, “Hey Man Nice Shot”, it was in 1999 when Patrick and company truly proved their worth with an all-round stronger follow-up. Now, to celebrate the twentieth anniversary of their pivotal album, Filter are reissuing Title Of Record, which will include a number of bonus tracks, remixes and live cuts, and will be available on vinyl for the very first time.

From the familiar hum of the opening song, “Sand”, as the album eases into the ferocious yet oddly catchy, “Welcome To The Fold” – the real opener – I am reminded just how great Filter is. While I must admit, it has been some time since I dug deep into their work beyond their hits, Patrick’s vocals can be both slinky and mellow, similar to those of Jane’s Addiction’s Perry Farrell, and aggressively throaty, akin to Scott Weiland, all within the same song. Right off the bat, it is worth noting that Patrick does not get enough credit as both a songwriter and among the most powerful vocalists of the ‘90s with “Welcome To The Fold” standing as an eternally badass track that rips thorough your speakers. The album continues forward with a flurry of strong hard rock and electronic fusions – “Captain Blight”, “It’s Gonna Kill Me”, and “I Will Lead You” – and of course the quintessential hit, “Take A Picture”, a track that continues to prove itself to be simply timeless.

The 20th anniversary edition of Title Of Record continues with a series of bonus material, the first of which, “Jurassitol”, is a grungy and dark track led by building electric drums and Patrick’s throaty vocals that was originally released on the truly outstanding soundtrack for the 1994 film, The Crow. Similarly, “(Can’t You) Trip Like I Do” was previously released on the 1997 soundtrack for Spawn and follows in tone to that of “Jurassitol”. The remaining bonus tracks on the physical versions include a remix of “The Best Of Things” by The Humble Brothers and a H&H remix of “Take A Picture”, both of which give a unique spin on the original material, but prove to be less exciting over all. The expanded digital edition includes an additional remix of “The Best Of Things”, “Take A Picture”, and “Welcome To The Fold” which, once again, seem to further remove any sense of danger and excitement from the original songs. That being said, the live cut of “Take A Picture” – from the digital version – is the strongest of the bonus material presented as it truly brings the track to life.

It goes without saying that Title Of Record still stands as a strong album two decades later. The re-release reasserts exactly why Patrick’s creative output was one that continued to shape industrial and alternative music heading into the 2000’s with an album that is certainly among the best of the genre from that era. While the bonus tracks may not bring anything particularly new or special to the table, the remastered 20th anniversary edition of Title Of Record proves to be just as exciting of a release as it was back in ’99; ultimately leaving me excited to see what is to come from Filter in the future.

A passion for music has always been a part of Gerrod’s life. As a young boy, he was raised on a steady diet of the music from The Chili Peppers, Aerosmith, The Stones, Prince, and others from his mum. Raised in the GTA, Gerrod continued to foster his love for music by attending a wide range of concerts and learning the drums. His unapologetic passion for music has no bounds and has spread to a wide variety of styles, whether it be the 90’s rock that sound tracked his teenage years, the jazz he studied in university, or his newfound love for hip-hop. He recently received his bachelors in music and education from York University and is passionate about writing and reviewing good (and less than good) music. Gerrod is also the drummer and songwriter for a Toronto based rock & roll band, One In The Chamber.
RELATED ARTICLES
album reviewalbum reviewsfilter
7.0