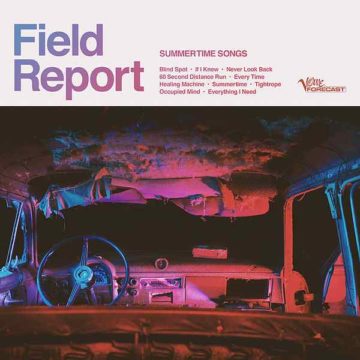 The opening lyric of “Summertime”, mid-way into folk-rock band Field Report’s third album Summertime Songs, is almost a dare: “She said ‘Why don’t you try summertime songs?” In his own particular way, frontman and lyricist Porterfield has complied, calling this newest release “our version of a Summer record… it’s a pop record”.  Indeed, Field Report has returned with a fuller, more approachable sound than previously. But there is a restlessness hanging in the wide-open air. Give Summertime Songs a few listens and Porterfield’s characteristic vulnerability bubbles to the surface through his confessional lyrics and the cracks in his voice, supported effectively by newly rolling lush instrumentals and production.

Portersfield’s writing shines most when he is storytelling, such as in “Blind Spot”:

“I woke up blacked out in a snowstorm
With an airbag burn on my cheek
Check the wreckage, walk away ok
I’m gonna change
Swearing to and plowing through the trees.”

He also has an eye for the affectingly mundane, as in “Occupied Mind”: “The week the dog went deaf I called for her all night/ When I found her I stared into her big, dumb eyes and mouthed ‘everything’s all right.”

However, while Porterfield is primarily known for his ability as a lyricist, he is sometimes at his strongest in those areas of honesty that arrive when one is at a loss for words. On the outro of “Every Time”, he finds a searing depth of emotion through the repetition of a simple phrase. The more upbeat, filled-out musicality of Summertime Songs lifts these pared-down, direct lyrics, and is a welcome new direction, seeing the addition of electric guitar, synth, and backing vocals throughout.

The album finishes with the surprisingly torchlight-jazzy, and most brokenly romantic song of the bunch, “Everything I Need”. It’s a fitting finale, with Portersfield aching through the lyrics: “Baby I don’t trust this moment but I want to believe, When everything is changing you are everything I need.” There’s grit in there – despair about politics, anxiety about the frailty of the future – but there’s also love, and hope.

For Field Report, big summer skies carry heavy, humid pain, but they are also a place for dreamers. It’s that relentless optimism in the face of unease that ultimately makes Summertime Songs so endearing.

The Spill Magazine is a Toronto-based online publication dedicated to covering the independent music scene with a strong focus on our thriving hometown talent. Our writers bring you up-to-date news, in-depth features on musicians and reviews for the latest CD releases. We also travel to the front lines for all local festivals including Canadian Music Week and North by Northeast. Don’t forget to check out our Facebook and Twitter pages for all daily Spill updates.
RELATED ARTICLES
album reviewsverve label group
8.0