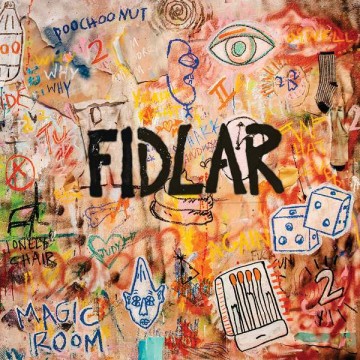 Skate/garage punk band Fidlar’s new album Too oozes a cohesive range in vocals from harsh to sweet, and some great punk riffs and beats.

The band finally came through with a professionally rendered and recorded album in September.

The 12 tracks – featuring thrash, beach vibes, a cohesive range in vocals from harsh to sweet, and some great punk riffs and beats – boast a more refined sound. The static and noise from their previous basement recordings are no longer present or overwhelming to the ear. But don’t fret, they still sound like the good vibes-driven garage band they started as.

The album artwork is very abstract expressionist and reflects the band’s musical style and their range in mood and method for each song.

If you’re into the skate punk scene and appreciate albums that are full of tracks with varied lyrical topics (not just about that one break up the lead couldn’t quite get over), Fidlar’s Too is the album you should scope out next. Check out “40 oz On Repeat.”

Emily Fin is an illustration student at OCAD University in Toronto. She really digs the many sub-genres of punk music and dogs. You can scope out her artwork at romaniranch.tumblr.com.
RELATED ARTICLES
album reviewsfidlar
8.0