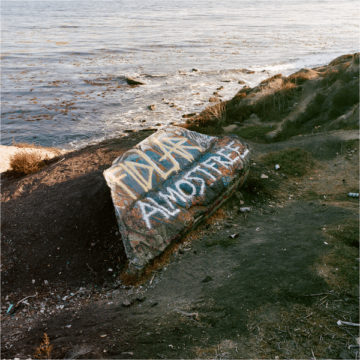 California skate punk band FIDLAR release today their highly anticipated third album Almost Free. The pre-released singles kept fans guessing what to expect: “Alcohol” sticks to the in-your-face FIDLAR party attitude, while “Can’t You See” takes a different turn both musically and lyrically. The opposing tracks are actually a perfect indication of what the album as a whole sounds like. The band has managed to remain true to their reckless anthemic roots while expanding into tongue-in-cheek social criticism and experimental instrumentation.

“Almost Free” serves as an instrumental interlude featuring an upbeat horn section. Similar cheerful musical themes in “Flake” and “Called You Twice” are contradicted by grim, despairing lyrics. “By Myself” epitomizes this irony in both the song and video, making the point to not take oneself too seriously.

The album winds down with “Good Times Are Over” which is a powerful resignation to misery. With no mocking happy music, the track stresses admitting sadness rather than pretending everything is ok.

The raw honesty in addressing relatable issues such as materialism, superficiality and alienation is matched by the music’s sonic integrity. FIDLAR is one of those few bands that are the real deal and are totally transparent. They have something to say and they say it straight up, no beating around the bush.

Nicole Swanson has recently made the move to Toronto from Fernie, BC, trading mountain life in pursuit of a career in the music industry. She can usually be found at live shows throughout the week, always in search of great new music.
RELATED ARTICLES
album reviewalbum reviewsalmost free
7.0