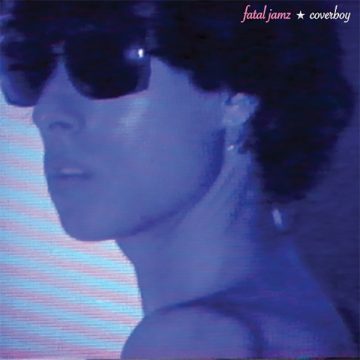 A tribute to all things Glam; Fatal Jamz returns with a 10-track nostalgia trip through all the lush splendor of one of Rock ‘n’ Roll’s most memorable eras. Fatal Jamz is not the first musical effort of creator/songwriter Marion Belle. The L.A. Pop enthusiast has been performing and writing for years, gradually gaining a following as an eccentric and flamboyant frontman to keep an eye on. Now after multiple Fatal Jamz releases over the past few years, Belle gives us Coverboy, his most confident piece yet.

The first full-length release on Lolipop records was recorded over the past three years in a penthouse in L.A., and the result is an authentically retro collection of polished tunes. The album opens with one of the strongest feel-good songs of the bunch. “Jean Paul Gaultier” catches our attention, opening with soaring guitar harmonies that would make British Glam Rockers The Darkness proud. The track keeps your head bobbing along with a steady rhythm and the kick drum perfectly pounding along with every note in the vintage bass line. Then into a killer sing-along chorus this album opener effectively shows us what aesthetic Coverboy is all about. The title track “Coverboy” keeps the vibe going with more great dreamy melodies, retro synths and guitars soaked in reverb. Fatal Jamz reminds us in following tracks, however, of its New-Wave sensibilities, with tracks like “In My Car” and “Rookie.” The dual guitar opening to “In My Car” along with the simple drum beat would feel at home on an album by The Cure. “Rookie” is another really strong track, actually being a re-release of a fan favourite from 2013. Big drum fills and chiming synths layered over Belle belting out “She’s a Rookie Girl!” at the chorus makes for another memorable sing-along moment.

Belle really holds nothing back on this album; as he sums up aptly in the opening lines of “Lead Singer:” “I’m a lead singer, and baby I give you my heart.” Another strong addition to this collection; opening with some of the most infectious head-banging guitar of the album. There are, however, a couple points in the later half of the album where the retro rock-star tribute is laid on so thick we cross over from charming to a bit cheesy. On tracks like “Nikki Sixx” and “Gigolo,” for example, it’s hard to find anything too memorable other than a few silly lyrics. The album does, however, bring us back in with “Rookie,” and the final track “Touch The Flame,” which is the closest we get to a power ballad. It really does work as an effective closer; with a big chorus and a wailing guitar solo that sounds like it’s been held in the past nine tracks, just waiting for this final moment.

Coverboy may lose us for a couple moments but it really is a solid piece of work and an impressive reanimating of a past aesthetic that so many retro artists have failed to effectively capture. So don’t overthink it; play it loud, and get used to hearing the name Fatal Jamz more often, because this guy does what he does well.

Growing up in the dull suburbs of Southern Ontario, Elijah gravitated towards the city at a young age. With a healthy addiction to live music, and a constant itch for discovering his new favourite band, he finds himself happily submerged in Toronto's music scene. With his work appearing thus far in Sock Monkey Sound, and The Spill Magazine, he's going to keep this writing thing going for a while.
RELATED ARTICLES
lolipop records
8.0

by Rachel Fucci on August 17, 2018
Mystic Braves The Great Unknown Lolipop Records There’s a beach somewhere in Southern California where it’s been the Summer of Love for the last 50 years. The air is consistently [...]

by Isabel Armiento on July 5, 2018
FEED THE CHILDREN, YOU DUMMY A CONVERSATION WITH CHEAP TISSUE The eclectically-named garage punk band Cheap Tissue brings back the nostalgia of old school [...]
7.0