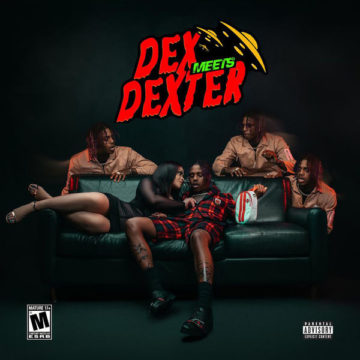 Famous Dex, a well known Chicago rapper, has always been able to deliver fun filled music. Whether it be through multiple mixtapes and collaborations with his labelmates Rich the Kid and Jay Critch, Famous Dex has made a name for himself. Despite people categorizing Famous Dex as a mumble rapper in today’s hip-hop scene, his debut project, Dex Meets Dexter, shows that he is not one-dimensional, but a lighthearted artist with a unique and diverse sound.

On Dex Meets Dexter, the majority of songs are lighthearted and made for entertainment. There are no serious issues being talked about or dark vibes. Famous Dex made an album that a person to can listen to at a party or with a group of friends.

With a fifteen-song album, Famous Dex has recruited top artists such as A$AP Rocky, Wiz  Khalifia, and Diplo. Among the fifteen songs on the album, two songs are standouts, the first being “Pick It Up” featuring A$AP Rocky and the second called “Japan”. “Pick it Up” is a perfect mix of A$AP Rocky’s and Famous Dex‘s style and cadence. Such things allow the song to be distinct from the other tracks on the album and shows what these artist can do on such a rhythmic beat. The second, “Japan” provides everything that a hit should bring. The track has a perfect length of two minutes, has an enchanting chorus, and provides two verses that are as catchy as the chorus. In “Japan”, Famous Dex constantly says:

“Baby girl, what you doing, where your mans?,
I just popped a xan, fifty thousand in Japan,
I ain’t doin’ no playin’, these red bottoms, not no Vans,
And she tellin’ all her friends, I might put ’em on the ‘gram”

This chorus, in conjunction with the verses, allows listeners to easily remember the song and makes them want to listen to it repeatedly. When listening to these songs, it shows that Famous Dex is able to make great music.

Furthermore, in Dex Meets Dexter, Famous Dex shows that he can create multiple styles of music. In songs like “Light”, “Said So”, and “Them Days”, Famous Dex experiments with autotune and attempts to sing rather than rap. These types of songs are different from the songs that he has released on prior mixtapes and features he has done. It demonstrates that he is not one-dimensional and that he can expand to other forms in music.

Overall, Famous Dex has made a great impression with his first album. Rather than be a labeled a mumble rapper, Famous Dex shows that he is hardworking artist trying to make a name for himself.

I'm a just lover of hip-hop and photography who grew up in Ajax Ontario. Through this platform I hope to share my opinion on the world of rap and bring a new perspective to new upcoming acts, artist, and the music scene. In addition to being a lover of hip-hop, I love to capture photos of these artist in the mean while.
RELATED ARTICLES
300 entertainmenta$ap rockyalbum review
6.0

by Jonathan Hazlewood on June 6, 2018
Fetty Wap Bruce Wayne 300 Entertainment New Jersey artist Fetty Wap has released his second project of 2018. Following the E.P release of, “For My Fans 3″ in January, Fetty Wap [...]