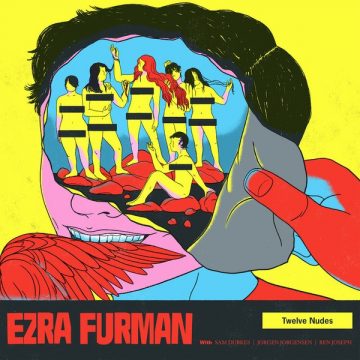 I will be honest and say that I was totally unprepared for this singular fact – that on the day that Tool finally introduced us to their first album in 13 years, theirs would not be the most urgent, thunderous, or unrelenting release of the day. Take a bow Ezra Furman.

I was a stranger to Ezra Furman until 2018, when the album Transangelic Exodus kicked me directly in the consciousness. Though it was Furman’s seventh album, the fire and ferocity of the album grabbed hold of me in such a way that I could not help but feel like I had been missing something significant before then, both musically and on a much grander and more human scale. This was an album that painted the world I thought I knew, not just in different colours, but with an entirely new brush. With Twelve Nudes, Furman has maintained the singular focus, not to mention the fury, and with outrageous results.

There is so much to love about Twelve Nudes, starting right at the beginning with Furman unflinchingly painting a picture of a nation and an individual equally torn by present-day realities. Ranging from relationships to politics, Furman explores identity, mental health, and the larger realities of the day, soaking them all in thunderstorms of punk-drenched guitar. This, like its predecessor, is an album not to be missed.

Br. lives in southern Ontario, grew up on The Beatles and The Journeymen, spent his adolescence immersed in grunge, and his adulthood in British alternative. His greatest joy is seeing his son dance and grow into his own appreciation of the indescribable joy of music...
RELATED ARTICLES
album reviewalbum reviewsbella union
9.0