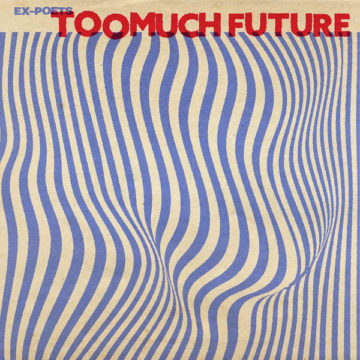 Ex-poets
Too Much Future
Text Me Records

Adeptly fusing rock, soul, jazz, and R&B on Too Much Future, the debut album from Ex-poets sounds like nothing else. The studied eclecticism of the duo, who met as music students at The New School in New York City, and their command of multiple genres also characterizes Young Fathers, TV on the Radio, Massive Attack, Prince, and Radiohead.

Soul and R&B are the main influences on Too Much Future, imbuing woozy opener “Our Homes” with a warmth that complements its plaintive jazz piano. On bass-driven “Still Waiting,” vocalist Colin Killalea laments with an aching Smokey Robinson falsetto, and “Tracks” wouldn’t sound out of place on Maxwell’s recent album. What elevates an Ex-poets song beyond modern R&B, however, is the sophistication in song arrangement. “Grace” unfolds in distinct parts like scenes in a play, making cryptic lines like “Yours was the brightest in the night/Did you drop the ball for everyone?” and “You turned into a vapor” theatrical. Multi-instrumentalist Jordan Brooks defies rhythmic conventions without overextending, though, thus the down-tempo dub of “Colorguard” marches with restrained precision.

When the warped, duelling drones that signal “Animales” suddenly arrive, one suspects Ex-poets could be capable of anything. A deep-album cut if there ever was one, “Animales” is an oblique standout on a record distinguished by its variation—an outlier among outliers—and the unexpected dread is riveting. Too Much Future might evade classification, but it is not a “grower.” This masterful debut is diverse yet accessible, and it rewards the listener almost instantly.

Charles T. Stokes is a nonprofit resource development coordinator and donor researcher based in Denver, USA. He’s also a tennis player and writer looking to make a racket with his own noises. “There are places in the world where one cannot publicly listen to or perform whatever music they choose without fear of harassment or prosecution. The freedom to write about new music is power, a privilege.”
RELATED ARTICLES
album reviewalbum reviewstext me records
9.0