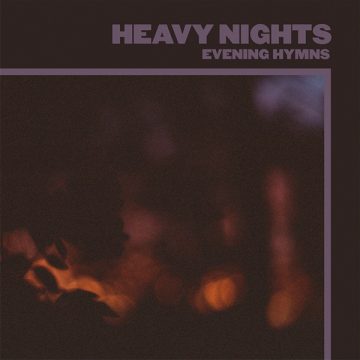 Evening Hymns albums are distinctly different from Bonetta’s solo works. There are vocals here, and the songs are somewhat more conventional in form. However, there is nothing conventional about this album. He experiments with new sounds and instrumentation.  “I Can Only Be Good”, opens with solo electric piano, later adding some very tasteful saxophone from Joseph Shabason. Elsewhere, Huizinga makes an appearance, providing violin on the title track, which adds a great deal to the beautiful song. Elsewhere, guitarist Jose Contreas of By Divine Right adds his distinct guitar. There are others who have contributed to the album, and Bonetta is able to bring everyone together to form a cohesive sound.

Musically, the album flows from one song to the next. It is full of strong, memorable melodies. Bonetta, who produced the album, has arranged the songs so that each one stands on its own, yet they all fit together to form a very strong whole. Bonetta is able to mix different genres into one consistent sound. Layered ambient sounds for a solid frame for Bonetta to add his strong sense of melody. “Kiss My Dreams” is an excellent example of this.

Lyrically, the album title spells it out, Heavy Nights: this is an album about loss, love and life. Opening with the line “I don’t want to fall in love again”, Bonetta goes through a flood of emotions here, and addresses loss in forms of lost love, and the impact of the death of his father on “My Drugs, My Dreams”. Although heavy, it does end on a positive note, with the beautiful “Halfway To The Moon”, a song about new love and a bright future.

Heavy Nights is that rare album that is on one hand very personal but on the other hand a work of art with which an audience can identify. It brings to mind albums such as John Lennon/Plastic Ono Band or Dylan’s Blood On The Tracks. This is a remarkable album. Well done, Mr. Bonetta.

Born and raised in Whitby, Aaron discovered music through his love of The Beatles. This led to a career in radio, writing for various publications, and ultimately a radio show about The Beatles (Beatles Universe), which ran for over four years. When not immersed in music, Aaron enjoys spending time with the loves of his life -- his wife Andrea, and daughters Emily and Linda (all of whom have an intense love of music too).
RELATED ARTICLES
album reviewalbum reviewsevening hymns
9.0