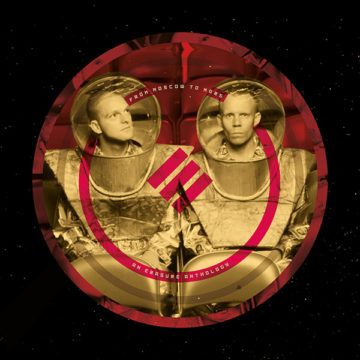 To celebrate their 30th anniversary, Vince Clarke and Andy Bell (known to us all as Erasure) thought they should put together something retrospective: a 12 CD plus one DVD boxset. 13 discs in total.

This set does NOT include all of their albums. It is not a collection of their studio albums with bonus tracks. This is a boxset put together by the band; almost like a whole new album.

Quick history lesson: Clarke spent a couple of years with Depeche Mode, during which he wrote their first album, then moved on to Yazoo (or Yaz) with Alison Moyet. This fantastic union ended after two brilliant albums. Then he wrote the single “Never Never (The Assembly Song)” by The Assembly. So, when Clarke formed Erasure with vocalist Andy Bell, no one thought the union would last more than one album. Well, it did last; 30 years and 16 albums later they are still here.

This set features all of their singles (CDs 1 to 3). Honestly, there is not a bad song among them. CDs 4 and 5 are favourite album cuts, as picked by Erasure. Erasure may be known as a singles “synthpop” band, but they also produced fantastic and strong albums, and the songs here demonstrate their strength as writers. “Witch in A Ditch”, “Home”, and “Alien” are just a few of the standouts.

If you are still listening, CDs 6 and 7 are B-sides. One of the treats of Erasure singles was flipping the record over and discovering non-album songs, such as “She Won’t Be Home” (a heartbreaking Christmas song), “True Love Wars”, and the cosmic “Tomorrow’s World”.

Onto CDs 8 and 9, which features old and new remixes. For me, the low point are these remixes. They are not entirely necessary, though fun to listen to, and are very different from the original recordings.

Disc 10 is a live CD. This CD proves that not only are Erasure a great studio band, their music also translated well to the live stage. Their shows have always been visually stunning, as evidenced on the 13th disc, which is a live DVD from their 1989 Wild Tour. There is another show from their 1992 Phantasmagorical Entertainment Tour. It’s not essential listening, but interesting and well-recorded.

Overall, a fantastic overview of this remarkable band. The packaging of the set is beyond description, including the box in which it is mailed in.

It goes without saying that you might want to be a diehard fan before diving into this box. That being said, it is thoughtfully put together and a work of art (the CDs, the music and the packaging). To really appreciate it, beyond the first three CDs (which are the hits), you might want to be a huge fan who is willing to invest the time into this hefty compilation.

Born and raised in Whitby, Aaron discovered music through his love of The Beatles. This led to a career in radio, writing for various publications, and ultimately a radio show about The Beatles (Beatles Universe), which ran for over four years. When not immersed in music, Aaron enjoys spending time with the loves of his life -- his wife Andrea, and daughters Emily and Linda (all of whom have an intense love of music too).
RELATED ARTICLES
album reviewsandy bellerasure
7.0