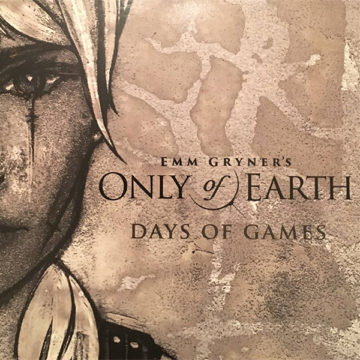 Emm Gryner is known for her typical folk pop stylings. Her latest project has a little divergence from the norm. It’s a 3-part series known as Only of Earth. It will be accompanied by graphic novels and other literature to really set the scene of what Gryner is going for.

The project begins with Days of Games. It delivers a very different feel than what Gryner fans are used to. The inspiration comes from the birth of a child, the death of the iconic David Bowie, and the passing of Greg Lowe. All of these can be felt throughout the album. A former member of David Bowie’s band, Gryner goes for a style much more similar to his, using heavy rock guitar riffs, usually played by Greg Lowe, and adding a synthesizer to give it a more space adventure feel.  The guitar work fits in perfectly with the rock stylings of the ’70s and ’80s, in a form that would make Bowie proud.

“Imagination” is the first single from the album and helps to remind the listener that this is a science fiction album. The whole album really tells a story, and it is in full swing by the time “A Mission” rolls around. It has a beautiful guitar intro that pairs perfectly with  Gryner’s voice. Lowe’s guitar work comes through though and provides for the serious tone of what Gryner is saying. He helps to establish the idea of the mission by showing his guitar work to add a dangerous factor, but it also feels triumphant. This means that the mission Gryner is singing about will be accomplished, though it may be difficult.

“The Spark” begins with a powerful guitar solo that rolls right into a rock riff that can’t be easily forgotten. This song actually seems to feel a lot like “War Pigs” by Black Sabbath. It does so by splitting up lines in the verse with a heavy guitar part and impressive guitar soloing throughout. Gryner’s voice just adds to the feel of a powerful classic rock sound because of the reverb added to it.

Though Days of Games is a different take to what Gryner is usually putting out, it still has some legs to stand on. It escapes the folk genre completely, but it does a very good job as making an appearance as a rock album with a very classic vibe.