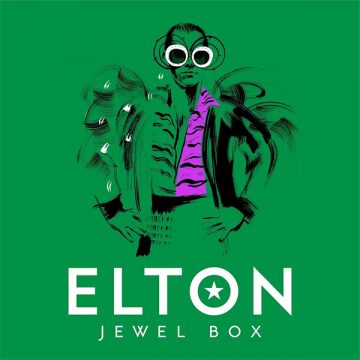 Elton: Jewel Box, a newly-released boxed set, delves into Elton John’s extensive back catalogue. Containing 148 songs, including 60 previously unreleased ones, Sir Elton curates this sprawling compilation, unearthed from the archives, spanning 1965-2019 of his and lyricist Bernie Taupin’s magnificent musical journey. The set itself is split into four distinct sections: Deep Cuts, Rarities, B-Sides and This Is Me…, and is available as an eight-disc box set, nine-LP bundle, four-LP, three-LP, two-LP, digital download, and streaming formats.

Things kick off with the Deep Cuts. Elton handpicked the selection of tracks as his personal favourite amongst his most obscure, less prominent works. Shining a light on a handful of remarkable tracks that were overshadowed and unappreciated simply because they don’t hold a candle to hits like, well… “Candle In The Wind.” In their own right, these collaborations with Leon Russell and select tracks off of the Captain Fantastic album, tracks like “(Gotta Get A) Meal Ticket” and “We All Fall In Love Sometimes,” get the attention they so rightfully deserve here.

On to the Rarities. Ranging from 1965-1971, this section encompasses the material from the early beginnings of Elton and Taupin’s careers, when the duo were still getting their feet wet as musicians and songwriters. Included here is the first composition from the songwriting partnership “Scarecrow,” as well as material from his early band Bluesology. The rarities make up the bulk of the songs on the box set; piano/vocal demos and alternative versions pull the curtain back on songs from some of his first albums. One track, the psychedelic “Regimental Sgt. Zippo”, carries major Sgt. Pepper vibes, and is a relic from a prospective 1969 debut record that was eventually scrapped altogether.

The B-Sides, ranging from 1976-2005, sees all 36 of Elton’s B-sides compiled  together in one place. They are revealing and insightful and worth examining even when they don’t always hit their marks. B-sides are B-sides for a reason after all. There are duets with France Gall and KiKi Dee, and while they may not elicit as much attention as, say, the rarities, they’re still a nice inclusion.

Jewel Box concludes with And This Is Me…, which stands out in a somewhat odd way, in concept, compared to the sections leading up to it: all the songs have been previously released, are easily accessible and range in popularity. And This Is Me… acts as a sort of companion piece to Elton’s autobiography Me; it features 16 songs that have a strong significance to the book. Nonetheless, one can never grow tired of hearing classics like “Border Song” or “Philadelphia Freedom.”

All in all, it’s simply fantastic. There are over eight hours of material for fans to dig through here. That’s not even counting all the copious liner notes, detailed illustrations, and track-by-track commentary that the various physical editions have to offer. Passing down a jewelry box of hidden gems, uncut diamonds, relics of the past, and pieces abandoned for good reason, the newly-released boxed set documents Elton John’s legacy, not through his hits but through his lesser-known works.

by Gerrod Harris on November 13, 2020
AC/DC Power Up Sony Music Despite the running joke that all of their albums sound the same, AC/DC remains among the biggest bands in the world, a seemingly unwavering position they’ve held since ‘80 [...]
9.0