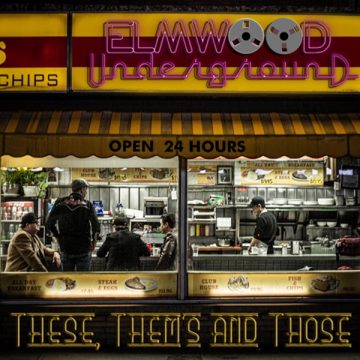 Elmwood Underground
These, Them’s And Those
Independent

Let us put everything on the table. There is a heavy and sad cloud hanging over this album. Sean Cunnington, guitarist for the band, passed away on March 18, 2020 due to COVID-19. So, what should be celebratory, the release of a debut album by a very talented band, carries with it other emotions. I start the review with this in order to set a context. Listening to this album to review is not the same as reviewing other bands.

As an album, These, Them’s And Those is the sound of four very talented players performing their collective hearts out. It is a tight, rocking, well played album. Tommy Blacknine’s vocals are the perfect rock vocals, with the right amount of grit, growl, and expressions. Scott Apted (drums) and Dwayne Lau (bass) provide a solid rhythm section and ground the band. Meanwhile, Sean Cunnington lets his guitar sing, howl and play. His playing is inspiring and his solos fit with the music. Give the last track a listen, “It Kinda Blows My Mind”, an aptly-titled rocker which features a tasteful solo at the end which would be meaningless without the solid support of the rest of the band.

To be honest, I was more than a little surprised that the opening track is titled “Body Bag (A Love Song To Tequila)”. This may get the band some unwanted attention, but I am glad they kick off the album in this manner. I am glad they didn’t change the track sequence or drop the song. Firstly, because it is a rocking song, but secondly because the band knew Cunnington, and they should be the ones to make any decisions regarding their art. Why anyone would write a love song to tequila may still be a topic of discussion.

The other songs follow along in the same vein –straight ahead rock ‘n’ roll. No tricks, no studio adjustments, just four guys making a solid, unified sound. There are many highlights, including the two early singles from the album, “All Night” and “Somebody Else Will”. These songs are catchy, and full of excitement and energy, and lots of it, which is how one can sum up the whole album–positive energy. It is the type of music one should be playing on the beach, or in the car during a long road trip. It certainly stands up to repeated listening.

This is Elmwood Underground’s debut release, and quite an impressive debut it is. However, one spin of the music and one knows these are not young, inexperienced guys, quite the opposite. This is a tight, professional unit and These, Them’s And Those is an album of which to be proud.

Born and raised in Whitby, Aaron discovered music through his love of The Beatles. This led to a career in radio, writing for various publications, and ultimately a radio show about The Beatles (Beatles Universe), which ran for over four years. When not immersed in music, Aaron enjoys spending time with the loves of his life -- his wife Andrea, and daughters Emily and Linda (all of whom have an intense love of music too).
RELATED ARTICLES
album reviewalbum reviewsdwayne lau
9.0