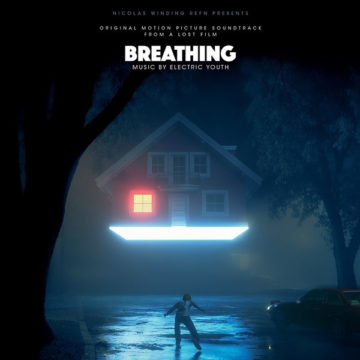 Sometimes it is hard not to pigeonhole a band based on its name. After all, the Toronto duo Austin Garrick and Bronwyn Griffin named their band after a Debbie Gibson album. With the electro-pop tag attached to it as something that is to describe their sound, of course you would expect a happy-go-lucky latter-day Human League style sound to come out of your speakers.

If that is what you expect from Electric Youth and their sophomore album Breathing, forget it. Luckily. Not that there’s anything wrong with good danceable electro-pop or Human League for that matter, just that the music the band have conjured on Breathing is a completely different kettle of fish. Good, tasty, kettle of fish.

You see, Electric Youth are into mood-inducing, cinematic music. It all started with their contribution to the soundtrack of Drive as well as their debut album Innerworld from 2014. It was immediately easy to hear that Electric Youth are more into the blue-shaded tones of the electro cinematic experience. The key word there was that Garrick’s synths and Griffin’s voice came up with some really tasteful music.

On Breathing the duo up the ante another notch, hitting that emotional button cinematic music is supposed to almost perfectly. Actually, the music was prepared for a film directed by Anthony Scott Burns that seems to have been lost. It so happened that another director, Nicolas Winding Refn, has a special vinyl series he curates for Milan Records and he decided to include Breathing in the series. But then, he is quite familiar with Electric Youth’s music since he directed Drive and has used their music in that movie.

As the band explains, “That film Anthony set out to create, the film we set out to score, is lost in time now. There is another film in its place, using some of its footage but with a different spirit. The title has been changed here to protect the innocent. This is the soundtrack from the lost film, an audio relic of the special film that once was.” We might never know what the original Breathing film would look and sound like, but the music that Electric Youth have come up with can truly stand up on its own as a unique experience.

Usually, cinematic music achieves its goal if it conveys the moods of the moving images it is supposed to accompany and does not necessarily have to stand on its own as a unified musical whole. Luckily, since Breathing the movie does not exist, Breathing the album is able to do two things – let you imagine what the movie might have looked like, but at the same time present itself as a unified musical piece.

Griffin’s vocals are quite striking throughout, while during the instrumental passages there is a prevailing moody feeling that doesn’t at any moment become dull. There’s an almost silky-smooth flow to the music that even the listeners who don’t favour electronic instrumentation will not object to.

Taking a few repeated listens to Breathing, I don’t really care what the movie would have looked like. I just know that this album is going on my ‘late night’ pile and that it will stay there for a while.

Formerly a lot of things, including a journalist and a translator, currently a freelance writer living in The Netherlands.
RELATED ARTICLES
album reviewsdriveelectric youth
8.0