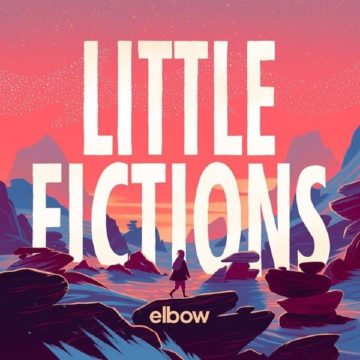 I am going to be honest; I was a bit nervous when I heard that Elbow was recording a new album. Their last album, 2014’s The Take Off and Landing of Everything, was so strong and nearly perfect that it felt like a swansong. Especially when the members embarked on solo careers throughout 2015, which included the brilliant Guy Garvey album, Courting The Squall.

So in 2016, when I had read that Elbow was recording their seventh album, I was excited and nervous as to what they could possibly pull together.

I needn’t have worried. From the first time I listened to this album, I heard a band that has not yet plateaued, and continue to explore to find new sounds and new ways in which to express themselves. Little Fictions is a stunning album.

The band is now a four piece, after the shocking and sudden departure of their drummer, Richard Jupp. He left the band just before they regrouped to begin recording. Guy Garvey (vocals and guitar), Mark Potter (guitar, backing vocals), his brother Craig Potter (keyboards/piano and backing vocals), and Pete Turner (bass and backing vocals) pulled themselves together, and with loops and beats from Craig Potter they soldiered on and produced an album that sounds like a refreshed Elbow.

That is not to say that this is a light, airy album. The theme throughout is confusion, loss, and trying to make sense of the world. Jupp’s departure is noted throughout some of Garvey’s lyrics. He lost not only a drummer, but also a friend. This being Elbow, their emotion and spirit flows through the music. After 26 years together, they know each other and how to play off and to each other.

Adding to their sound on the album are beautiful orchestrations from The Halle Orchestra, and the moving sounds of The Halle Ancoats Choir and members of London Contemporary Voices.  All of this leads to a spiritual vibe throughout the record. Garvey confronts the melancholy of aging by using many biblical references and trying to find out where he stands. “Firebrand And Angel” is an excellent example, ‘firebrand’ being a biblical reference to torch/light. He is not preaching, just referencing and figuring it all out.

This is the sound of a 42-year-old man who is trying to figure out life (failed relationships, losing friendships, starting new relationships) but does not have a road map, nor does he pretend to have any answers. Garvey is also questioning modern times and modern technology, “God, send us to a digital end” he sings with more than a little edge, “with following strangers and swiping at friends” (from the song “K2”).

That is the beauty of this album. Nothing simple about it, just straightforward honesty. Like many classic works; Garvey bares his soul for the world to hear. Musically, the album is Elbow, no major surprises, but the band has grown. The production is denser and the tone is set. Not so much dark, but rather dark colours. Elbow cannot be compared to anyone or any other band. Little Fictions cannot be compared to anything current. Both the band and this album are in their own league. They have, over the course of their career, carved out their own sound. While staying within that sound they have continued to grow and develop as musicians and artists.

This is the work of maturing artists, the sound of a band playing as one, and the sound of music.  The bad news for this band, is that this will be a hard one to beat, but I know they have it them.

Born and raised in Whitby, Aaron discovered music through his love of The Beatles. This led to a career in radio, writing for various publications, and ultimately a radio show about The Beatles (Beatles Universe), which ran for over four years. When not immersed in music, Aaron enjoys spending time with the loves of his life -- his wife Andrea, and daughters Emily and Linda (all of whom have an intense love of music too).
RELATED ARTICLES
album reviewsconcord music groupelbow
9.0