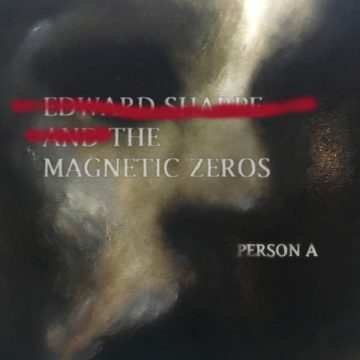 Edward Sharpe & the Magnetic Zeros has dropped its fourth Album, PersonA, following its previously self-titled release three years prior.  This Californian Indie, Folk, Hippie Fusion band has been touring around positive vibes since 2007 with a very loving, psychedelic sound. They currently have a 10-member lineup that plays a variety of strings, horns, keys, and percussion, fronted by the tantalizing vocals of Alex Ebert. After parting ways with the longtime accompanying vocalist Jade Castrinos the band has continued to write, perform and tour internationally. Rumour has it that the recording of this album was almost entirely in one room together. The LP was recorded in New Orleans, which has deep roots in music – especially in jazz – and you can hear some of the subtle influences of this in many of the tracks.

PersonA’s album cover shows Edward Sharpe crossed out of the band’s name in red paint. For those unfamiliar, the name Edward Sharpe was created as a kind of a messianic alter ego of a bandleader imagined up and written about by frontman Alex Ebert while in rehab. So this imagery could imply either the abandonment of the messianic figure in relationship to the band, or perhaps turning a new leaf and an evolution of the band as a whole. Reinventing themselves; the album is appropriately titled PersonA.

The album begins with “Hot Coals,” a track released last fall. Right from the get-go Ebert shows off his higher vocal range coinciding with deep ominous tones combined with mellifluous guitar plucks. This transforms into a less energetic experimental funk sound. An old-timey piano sound starts up as keys dance across smooth kicks and snares mixed with bassy hums. Even some of the subtle swearing contained in the track comes across as lighthearted within the context of the vocal pitch. In the last stretch of this seven-minute jam session as different instruments take turns taking the forefront of the sound. Vocals and violins echo along horns and electric organs showing off the full range of instruments involved in this particular piece.

Track two, “Uncomfortable,” begins with some more experimental sounds with resonating notes, digital manipulation and reversals. This shows some of the evolution of the band and breaking away from their earlier more traditional folk sound. The introductory vocals reminds one of the timing of Black Sabbath’s “War Pigs” but with Ebert’s much smoother homely sound. The line “you’ve got to get uncomfortable” gets repeated throughout and really resonates with the listener. “Somewhere” follows with a Beatle-esque homage to “Here Comes the Sun” with a similar happy-go-lucky guitar melody and a steady rhythmic clap. Track four, “No Love Like Yours,” leans away from the more experimental and brings forth fond memories of a classic Edward Sharpe sound reminiscent of their first album. A sentimental folk song about love that overcomes you with a warm fuzzy feeling inside with its lackadaisical groove. The leading vocals are accompanied by an angelic choir emphasizing his cheery verses. “Wake Up The Sun” follows. A lot more piano makes an appearance on this album, giving it a pleasant flavour, a switch from the conventional guitar melodies and strums most commonly expressed by the band. This track in particular has a very virtuous soulful sound being expressed by Ebert’s voice.  A chorus rings out “All that you wanted was all that you found in your heart,” a look at happiness and self reflection and ends with echoing horns and buzzing drones.

Track eight titled “Perfect time” is a more somber tune that sounds like a sick and twisted Sinatra with darker lyrics. Ebert sings about the warped traits and travesties among people but sprinkles in an honest message of “What better a time for love.” A simple yet often overlooked idea on today’s society and the underlying theme of the hippie and free love movement popularized in the ‘60s. “Lullaby” starts to wind the album down with a soothing and relaxing track with a light-hearted piano melody that harmonizes with Ebert’s vocals. Back hymns and tinkles faintly join in throughout the piece until it fades out smoothly into “The Ballad of Yaya,” the final track on the album. It feels like a fusion of their traditional desert folk with a twist of heavier percussion and a series of layered instruments and sounds that have a well produced orchestrated sound as a whole. The transition of these installments mixed with the softer sections of more isolated vocals articulating engaging lyrics brings the album to a satisfying conclusion.

Overall the album is a unique take on the Psychedelic Folk genre and plays back and forth with different progressions, sounds, and styles. Although the vocal dichotomy of Ebert and Castrinos that older fans have grown to love will be missed, this album is a newer take on the band’s ongoing and clearly evolving sound. It pulls from classic sounds and upbeat acoustics that the band has come to be known for but isn’t limiting themselves to sticking with an easily reproduced cookie-cutter sound by constantly broadening their musical influence.