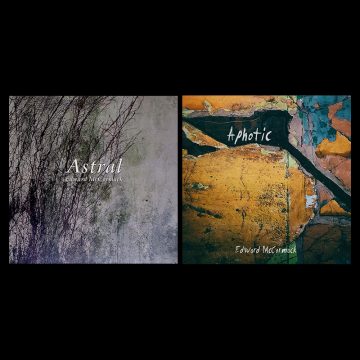 Ambient music is much like rock’n’roll, in that, within that genre there are many different styles and sub genres. Edward McCormack is one artist who releases music under this banner, but his style is distinctly his own. He is also an artist who continually creates, and he has been busy this year. Recently he released two new albums, Astral and Aphotic.

Although there are similarities between the two albums, they are also very different. Each album has its own theme. Aphotic begins with the somewhat disturbing “Fragment” but then drifts comfortably into the regal “King Of Kings”. These two songs establish and ground the mostly instrumental album themed around water. The aphotic zone is that part of a lake or ocean where there is no light, or as we called it “dark water”. This album is a bit more unsettling, and the use of the sound of waves and water mixed with the ominous music make one feel stranded in the middle of the ocean. Submarine sonar, voices, and other nautical sounds appear throughout the work, adding even more layers of discomfort. Tatjana Terentjeva provides vocals on “The Eternal”, which set against the slow ebbing sounds of the electronics, allows one to feel as if they are interrupting a dream.

McCormack takes his time with each song, allowing the creation to seep out on its own. The album moves along on its own time, as if he lets the songs decide when and where to end and when to rise to any form of conclusion. It is stunning, and magnificent work. From the opening notes to the closing fade out, it is a work of art. And as a film buff, the nod to the classic Vincent Price film, The Witchfinder, is always a welcome addition to the world.

Astral, on the other hand, is a much different album. As the title suggests, this album is based around the theme of flight, the stars, and space. That is exactly what one experiences when listening to Astral. McCormack is not afraid of silence and knows how to use space. He doesn’t feel the need to clutter his music, allowing the songs to, pardon the pun, soar. He leaves the quiet and spaces for the listener to fill in their own thoughts and interpretations.

Astral is built around four pieces, “Astral 1 – 4”, and each song is roughly the same length. Here he depends much more upon his use of electronics, and each song flows into the other. Astral is a dreamy affair, full of smooth, layered electronics and sounds. It is sublime peacefulness at its best.  This is a purely instrumental album, full of calming sounds.

Astral and Aphotic are two sides of a coin. Aphotic is somewhat claustrophobic while Astral is much more spacious and open, and both should be enjoyed separately. They are both incredible works but should be taken as separate pieces of art. McCormack has created two very unique and original ambient/electronic albums.

Born and raised in Whitby, Aaron discovered music through his love of The Beatles. This led to a career in radio, writing for various publications, and ultimately a radio show about The Beatles (Beatles Universe), which ran for over four years. When not immersed in music, Aaron enjoys spending time with the loves of his life -- his wife Andrea, and daughters Emily and Linda (all of whom have an intense love of music too).
RELATED ARTICLES
album reviewalbum reviewsedward mccormack
10