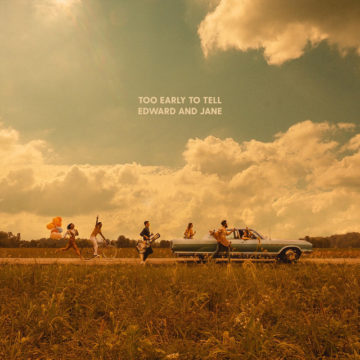 Edward And Jane
Too Early To Tell
Independent

Edward and Jane are Edward and Jane Carpenter, a married couple from Chattanooga, Tennessee and Edward and Jane is also the name of their six piece band.  Too Early To Tell is  their sophomore release, following their debut EP, As Family We Gather (2017). They call their music ‘folkicana’. I call it exquisite.

This is one powerful EP, that from the opening note to the very end keeps the listener in their grip. “You’re a fighter,” sings Edward on the opening song “Hold Your Own”. He continues “You’re a boxer in his ring/not easily tired/not easily broken by the Devil and his demons” Leading to the question “show me how you hold your own”. Powerful and brilliant, all set to some of the most melodic and beautiful Americana music being made.

But that is the tip of the iceberg. This EP does not let up for five songs, with the lead vocals being traded off between Edward and Jane, it leads one to a different state of mind and even a different time. To be honest, this EP, musically, takes me back many decades. That is not to say the music is dated, not at all, but it does feel steeped in classic acoustic folk music.

A lot of credit must go to producer Jonathan Class, who allows this band to do exactly what they must do. The songs dictate the structure and the arrangement and the rest falls into place. The use of more traditional instruments and human voice is perfect. The effect on the listener is pulling on those emotional strings that have not been pulled for a long time. To be honest, by the end of the EP I felt homesick. A weird feeling at my age, but it was a direct result of this music.

If you are looking for that perfect Sunday morning music or just plain perfect folk music, you need not look any further. This is it. Too Early To Tell is brilliant, stunning and should be heard by all. The down side of this EP, is that it is far too short. They are promising an album in October, and I look forward to that.

Edward and Jane is brilliant and this EP is, at the same time, traditional and groundbreaking. I don’t want to say that this band will be the next so and so, but in the same way Mumford and Sons took the world by storm, unexpectedly I might add, Edward and Jane are set to do the same.