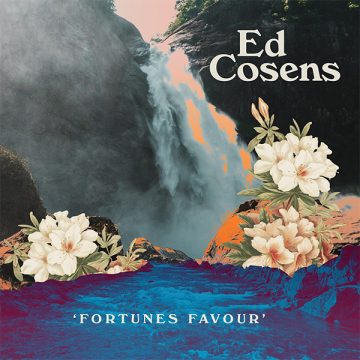 Ed Cosens makes his solo debut after 15 years of strumming for The Reverend and the Makers. Stepping out of his position as guitarist, Cosens shows he has chops to stand on his own–vulnerable songwriting, smooth, evocative vocals and careful, unpretentious arrangements.

Throughout Fortunes Favour’s 10-track duration, Cosens fluctuates between emanating influences as recognizable as The Beatles (see the short-lived but memorable “Last to Know”) to cutting his own course through paths previously laid by more modern indie-folk pioneers. Bands like My Morning Jacket and Ivan & Alyosha are brought to mind on singles “If” and “The River”, both arranged with enough piano and acoustic guitar to satisfy the coffeehouse crowd.

What’s special about Fortunes Favour and, to a great extent, Cosens’ established experience in songwriting, is the record isn’t held back by the limits of its genre. The standout “Madeleine” imbues folk-rock but is punctuated by a grungy guitar bridge rather than hand claps and shakers. “The Pantomime” sings its stadium-chant chorus post groovy, synth-laden verses, echoing the likes of Arctic Monkeys.

That’s not to say tracks like “Lovers Blues” and “Come On In” are at fault for being standard folk fare, but Cosens’ strength clearly lies in using his well-worn hands to craft something unique enough to not draw comparison to the myriad of current indie music makers.

For now, his first attempt at solo work is more than promising. Cosens has established that he has the talent and potential to continue along on his own if he so chooses.

Robert Defina is an avid critic both on paper and in person. He spends more time writing album reviews than he does worrying about his future. He hopes that this sort of procrastination never grows old.
RELATED ARTICLES
album reviewalbum reviews
8.0