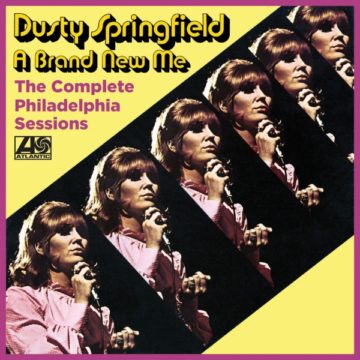 Originally released as a 10 song collection in early 1970, Dusty Springfield’s, Brand New Me: The Complete Philadelphia Sessions gets an expanded edition release on July 7th.

Born Mary Catherine O’Brien in 1939, Dusty Springfield epitomized the “Swinging Sixties” with her blonde bouffant hairdo, heavy makeup and a string of Top 40 hits, including “Wishin’ & Hopin’,” “You Don’t Have To Say You Love Me,” and “Son Of A Preacher Man.” Memorable songs like these made her an icon of the time.

In late 1969, Dusty, who was by then known as the “Queen of Blue Eyed Soul,” was booked by Atlantic Records boss Arif Mardin to enter Sigma Sound Studios in Philadelphia with the legendary soul producers Kenneth Gamble and Leon Huff, along with arranger/guitarists Thom Bell and Roland Chambers. Together, they recorded 17 songs in five days, that make up this new expanded edition of the original album.

Key cuts include the title cut cover of Jerry Butler’s  “A Brand New Me” along with extremely hooky “Richest Girl Alive” and the previously unreleased gem “Sweet Charlie.” Less successful are the melancholic tracks “Let’s Get Together Soon,” “Star Of My Show” and “Something For Nothing.”

Dusty’s career faded in the ’70s and early ’80s, but in 1987 she teamed up with The Pet Shop Boys for their Top 10 single “What Have I Done To Deserve This” and two years later she again earned radio airplay with the song “Nothing Has Been Proved,” which was included in the movie Scandal. In 1998 Springfield was inducted into the Rock and Roll Hall of Fame. Unfortunately she passed away the following year of cancer.

With new remixes done on all the tracks, the sound quality of the Extended Edition is up to snuff for 2017, and Springfield’s voice comes alive once again and sounds better than ever.

Gerry Young is President of Current Records and Management, and author of the 2011 biography Pop Goes The Weasel: Rock And Roll Off The Record, available at Indigo/Chapters, Barnes & Noble, and Amazon.com. He has recorded and managed Juno Award winning bands Martha And The Muffins and The Parachute Club among others.
RELATED ARTICLES
a brand new mealbum reviewsreal gone music